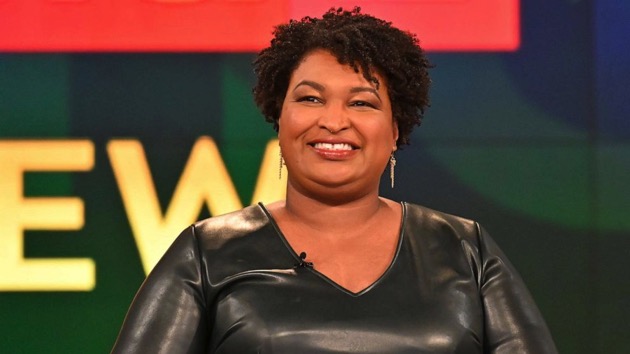 (NEW YORK) — Stacey Abrams, the former Georgia gubernatorial candidate who’s now focusing on tackling voter suppression head on, said she “absolutely” sees herself running for president one day, but for the 2020 cycle, she “would be honored” to run for vice president with whoever the Democratic nominee is.”Why should we not want someone to have the power to fix the problems and the brokenness that we have?” Abrams told the hosts of ABC’s The View. “I want to do good, and there is no stronger platform than president of the United States. And that’s a position I want to one day hold.”There’s been a lot of veep buzz around Abrams, who served as minority leader in the Georgia House of Representatives. She said if asked, she would join the Democratic ticket — but added that no one has asked her, yet.”It would be doing a disservice to every woman of color, every woman of ambition, every child who wants to think beyond their known space for me to say no or to pretend, ‘Oh, no, I don’t want it,'” she said. “Of course I want it. Of course I want to serve America. Of course I want to be a patriot and do this work.”And perhaps bolstering her chances of being picked by any of the candidates running, Abrams declined to endorse one candidate over the other, saying her “job right now is to fix our democracy” by ensuring everyone who’s eligible to vote, can.”My best service is to be in that neutral space where it’s not about who the nominee is — it’s about making sure no matter who the nominee is, any person who wants to go and vote, can vote,” she said. “That’s what we’re doing through Fair Fight 2020.”Fair Fight 2020 is a multi-million dollar initiative aimed at building up and financing voter protection operations in 20 battleground states throughout the current election cycle.In the 2018 gubernatorial election, Abrams lost to now Georgia Gov. Brian Kemp by just 1.5 percentage points, and she never conceded the election. Throughout that race, Abrams accused Kemp, then the secretary of state — meaning the person who oversees elections — of engaging in voter suppression, which Kemp denied.Back in November, a spokesperson for Abrams told ABC News that the funding goal for the teams in all 20 states was $5 million — and billionaire Democratic presidential candidate Mike Bloomberg made a donation of that amount to Abrams’ Fair Fight Political Action Committee (PAC) on Dec. 20, according to the campaign contribution disclosure report filed with the Georgia Government Transparency and Campaign Finance Commission.On Monday’s episode of The View, the hosts asked Abrams about this donation and the hundreds of millions of dollars Bloomberg, the former mayor of New York City, has spent during his presidential campaign.”I am grateful to any person who contributes to Fair Fight. We have more than one hundred thousand contributors. His check just had a few more zeros on it,” she said. “We appreciate that because as I said, I’m not endorsing anyone … My job is to make sure no matter who shows up, that they get to vote for who they want.”According to the latest disclosure report, filed on Feb. 7, Fair Fight PAC has raised nearly $20 million since its founding in December 2018, and almost $1.2 million last month. The PAC had just under $12 million cash on hand at the end of January.Abrams defended Bloomberg’s colossal campaign spending, saying, “I think that for once we actually know where the money is coming from.””Every person is allowed to run and should run the race that they think they should run, and Mike Bloomberg has chosen to use his finances. Other people are using their dog, their charisma, their whatever,” she added. “I think it’s an appropriate question to raise. But I don’t think it’s disqualifying for anyone to invest in fixing America.”On the heels of the Iowa Caucus and New Hampshire primary, Abrams also weighed in on the primary election calendar.”Right now, the results from the two smallest — two of the smallest states — are being seen as predictive of America’s values, and that’s just not true,” she said. “We’ve got 50 more contests coming. We got a whole lot of people who want to be heard, and our responsibility is to not start telling people what they’ve decided before they’ve even had a chance to start speaking.”She also discussed one of the biggest undertakings of 2020 — the U.S. census, a count that occurs once every 10 years.”The census undergirds almost every political and civic decision we make,” Abrams said.She asserted that minority communities would stand to lose billions of dollars in funding “if people of color do not get counted at the rates they should.””Those are dollars that don’t go into your schools, don’t go into your hospitals, don’t go into your roads. Those are the dollars that make up your life,” Abrams said. “And the reality is the moneys don’t disappear. They just go to the people who get overcounted, which tend to be wealthier white communities.”She added, “The solution is to answer the census … If you don’t get counted, you do not count.”The census is not just a count of U.S. citizens, it’s a count of everyone living in the United States, including undocumented immigrants. The Trump administration tried to add a citizenship question to the 2020 Census, but was unsuccessful.In the aftermath, fear still reverberates in undocumented communities, which Abrams touched on during her interview.”If you want to make sure that the person knocking on your door isn’t [Immigrants and Customs Enforcement], answer the census online. Fill it out on paper, make the phone call,” she said. “Because if you answer the census, when somebody knocks on your door, you know it’s not the census. So you just don’t answer the door.”She added that ICE would find someone if they have “a light bill or a cell phone.””So answer the census so you can get your money and your political power,” she said, adding “and be counted.”Copyright © 2020, ABC Audio. All rights reserved.