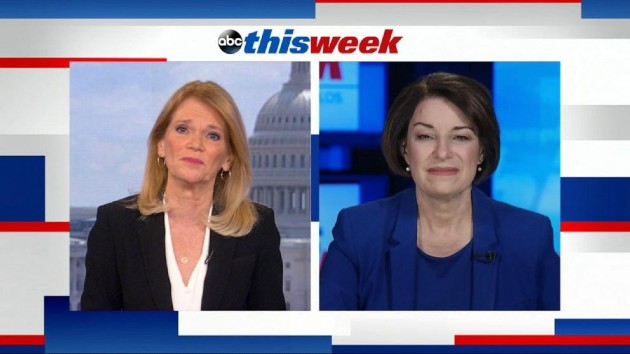 (LAS VEGAS) — Less than a week after her surprise third place finish in New Hampshire’s primary, Sen. Amy Klobuchar, D-Minn., acknowledged she is struggling to build support with minority voters, saying people need “to get to know me.””We see ourselves on an upward path. I never thought I was going to be able to compete with some of my opponents’ bank accounts, but what I don’t have in that I have in hard, hard work,” Klobuchar, speaking from Nevada, where voters will caucus Saturday, told ABC News’ This Week.Klobuchar’s comments come after a whirlwind week including what ABC News Chief White House Correspondent Jonathan Karl called a “breakthrough” debate performance in Manchester, New Hampshire.Her campaign said it raised more than $12 million in the week since the debate. She finished third in New Hampshire, behind opponents Sen. Bernie Sanders, I-Vt., and former South Bend, Indiana Mayor Pete Buttigieg.Since then, her campaign events in Nevada have seen record turnout — a state where her campaign has limited infrastructure, including just 50 staffers and two field offices.”We have all this money now. We’re finally able to run ads in Nevada, to run ads in the South Carolina and beyond,” she said. “That is a big difference. People don’t know me and then I’m going to emphasize my record.”Even with a strong finish in New Hampshire, Klobuchar still faces a steep uphill battle. Polls show she has limited support in Nevada and South Carolina.Klobuchar was asked about a controversial high-profile murder case she oversaw as prosecutor for Hennepin County involving a black teen. Defense attorneys for the teen say new evidence shows he may be innocent.Klobuchar said she “wasn’t aware of that information” and that “it must be reviewed immediately not just the new evidence, but old evidence as well.””Our job is to convict the guilty and protect the innocent,” she went on. “So when I look at something like this, I step back and say all of these cases when anything new comes in … puts into doubt any conviction, no matter when it is must be reviewed.”