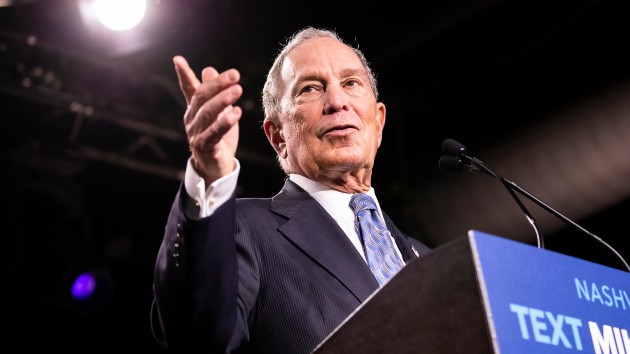 (RICHMOND, Va.) — Michael Bloomberg once again apologized for his long-time stop and frisk policy on Saturday night, addressing supporters at a local brewery.”I’ve gotten a lot of grief for it lately, but I defended it for too long,” Bloomberg said of the policy, which he utilized during his long tenure as New York City mayor. “And because I didn’t fully understand the unintentional pain it caused young black and brown kids and their families, I should have acted sooner and I should have stopped it, and I didn’t, and I apologize for that.”It was the first time on the campaign trail that he apologized unprompted to a group that wasn’t predominantly African Americans. A couple hours later, he delivered similar lines to more than a thousand guests at the Virginia Democratic Party’s Blue Commonwealth Gala, a move that suggested the apology is starting to become something he’s addressing more broadly.Just last week, tapes resurfaced from a 2015 Bloomberg appearance at the Aspen Institute, where he called for placing “a lot of cops where the crime is, which means minority neighborhoods.”Stop and frisk attempts to prevent crime by having police officers stop subjects and frisk their clothes if the officer has a reasonable belief that they could be involved in a crime. The practice has existed in police departments for decades, but its use in New York City expanded during Bloomberg’s time in office, specifically against black and brown men.An analysis of New York Police Department data by the New York Civil Liberties Union determined that in 2013, “black and Latino communities continued to be the overwhelming target of these tactics,” and that roughly 90% of New Yorkers who were stopped and frisked between 2010 and 2012 were “totally innocent.”Last week, a day after a Quinnipiac poll showed Bloomberg in second place behind Joe Biden among black voters, President Donald Trump seized on the resurfaced Aspen Institute remarks, retweeting the audio clip with the message, “WOW BLOOMBERG IS A TOTAL RACIST!” which he later deleted. Trump himself has been a supporter of stop and frisk tactics.Other Democratic candidates have also come out against Bloomberg on this issue. Bernie Sanders used some of the sharpest words so far, saying on Saturday, “If that candidate pursued, advocated for, and enacted racist policies, like stop and frisk, which caused poor communities of color in his city to live in fear, we will not defeat Donald Trump.”Tom Steyer told reporters Saturday, “I thought some of the clips that surfaced from 2015 about stop and frisk were scary.” But when asked if he felt the remarks were disqualifying, he said, “That is for the voters to decide.”So far, polling shows black voters at the center of the stop and frisk debate are strongly supporting Bloomberg, and black supporters ABC News spoke to on the campaign trail said they were able to look past stop and frisk.”I really do like Mike,” said Laolu Davies-Yemitan at the Houston Democratic Party dinner. “He did a lot of great things in New York. Yeah, he did a lot of things that we’re not happy with him about, such as stop and frisk, but he’s a businessman; he made a lot of things happen, he’s a philanthropist, and I think he would bring this country together.”At the same dinner, Duni Hebron said Bloomberg was one of his top two choices.

“We understand that what we have in the White House is not sustainable,” he said. “And so Bloomberg provides an alternative that we are definitely willing to consider.”  Copyright © 2020, ABC Audio. All rights reserved.