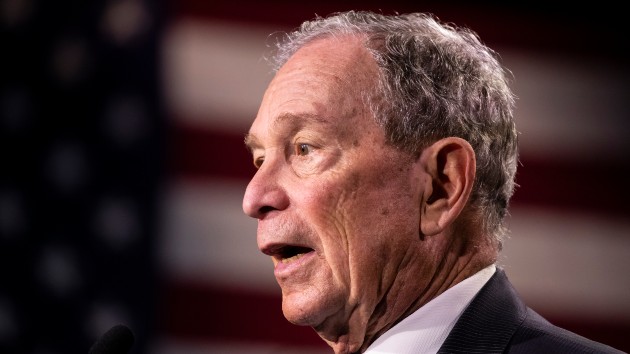 (WASHINGTON) — Mike Bloomberg may have been a late addition to the 2020 race for president, but the billionaire businessman and former New York City mayor has for years been quietly using his wealth to build what would become a national political network — with a massive scope that’s just now becoming visible.Bloomberg has pumped hundreds of millions of dollars into political donations and philanthropic urban grants that benefited progressive candidates and mayors, records reviewed by ABC News show. Through his nonprofit, Bloomberg Philanthropies, he financed a program at Harvard University to groom rising political stars that align with his vision for the country.Dozens of politicians who benefited from his early support have surfaced to endorse his campaign, and his unprecedented spending habits are changing the way political analysts and operatives view the viability of self-funded candidates.”The idea that a billionaire gives money to a candidate and doesn’t expect something return is a fallacy. That’s the problem with Mike Bloomberg entering this race,” said Yvette Simpson, an ABC News political contributor and the progressive political action committee, Democracy for America CEO. “It’s not just that Bloomberg has a lot of money. It’s that he can use his money to influence people – and has.”The endorsements could not have come at a better time. Political experts argue that the high-profile support has helped Bloomberg blunt a recent run of negative publicity surrounding his interactions with women and persons of color.”When candidates have a serious vulnerability, endorsements can be helpful to deflect attacks,” said Matthew Dowd, an ABC News political contributor. “For Michael Bloomberg, the endorsements he’s getting from African American leaders, women and prominent Democrats may very well bolster him.”The full impact of such endorsements isn’t yet known. But what’s becoming clear, Dowd and others said, is that the Bloomberg campaign for the Democratic nomination is redefining the role of money in politics. By virtue of the sheer volume of money at his disposal — a net worth estimated at more than $60 billion — Bloomberg is upending the typical arc of a presidential bid.Another self-described self-funded candidate, Donald Trump, once pledged not to accept donations in 2015. He ultimately spent $66 million of his own money on the campaign, but brought in far more — nearly $270 million — in donations. Before jumping into politics in 2015, Trump was also a longtime donor to Republicans and Democrats up and down the ballot — but not on Bloomberg’s scale.Bloomberg has already spent more than $350 million of his own money, flooding the airwaves with advertisements. His campaign has opened 150 offices and filled them with more than 2,400 campaign staffers who, according to The New York Times, are often paid nearly double a typical campaign salary.And, as records show, he’s growing an army of support among local and congressional leaders who have previously benefited from his largesse.”It’s not that these mayors and members of congress who Bloomberg has directed money to before are endorsing him only because of money,” said Perry Bacon, a senior writer at FiveThirtyEight. “But you can’t take that out of the equation either.”On the campaign trail, Bloomberg has described his wealth as a positive — boasting that special interests can’t buy him.”I’m the only candidate in the race who doesn’t take a penny of contributions from anyone,” Bloomberg said in a January television advertisement. “No big donors, no special interests — nothing.”But critics have said that strategy carries risks, in part because of the way he’s thrown around his own money.”Bloomberg says he can’t be bought — that’s because he’s doing the buying,” Jumaane Williams, the New York City Public Advocate and a supporter of Sen. Bernie Sanders, told ABC News on Thursday. “The risk is, they don’t get the same scrutiny, sometimes until it’s too late.”The Bloomberg campaign did not immediately respond to ABC News’ request for comment. But in December, a spokesperson told The New York Times that Bloomberg was “damn proud” of his philanthropic record, adding that “unlike Donald Trump, Mike Bloomberg has a real foundation that does real work addressing people’s serious needs with no expectations of anything in return.”

Congressional king-makerSince leaving New York’s city hall in 2013, campaign and charity disclosure documents reviewed by ABC News show that Bloomberg has emerged as a power broker. In 2018, the formerly Republican mayor announced a public commitment to donate $80 million to Democrats in the midterm elections, with an emphasis on flipping the House of Representatives by bankrolling female candidates.”I will be putting more money into supporting women candidates this cycle than any individual ever has before because if we’re going to win, it’s going to be women that get us there,” Bloomberg said at the time, speaking to EMILY’s List in September 2018.One of those recipients was Rep. Lucy McBath, D-Ga., who endorsed Bloomberg on Wednesday.McBath was among the top beneficiaries of Everytown Gun Safety in 2018. Bloomberg founded the pro-gun control group — which has both a non-profit branch and a super PAC — in 2013. In sum, Everytown spent more than $4.3 million in McBath’s competitive race as her most aggressive non-party backer. McBath, a vocal gun control activist whose son was shot to death in 2012, was a faith and outreach leader for Everytown before launching her congressional campaign in 2018.Another Bloomberg-backed group, Independence USA PAC, also spent $130,000 in support of McBath, and, more recently, Bloomberg personally donated $5,600 in November 2019 to her reelection effort — just weeks before he announced his presidential campaign.McBath isn’t alone. In the past week, six members of Congress have endorsed Bloomberg — three of whom received significant backing from groups heavily funded by the former New York City mayor.During the 2018 cycle, Independence USA PAC also spent $2.2 million each in support of Rep. Harley Stevens, D-Mich., and Rep. Mikie Sherrill D-N.J., both of whom endorsed Bloomberg last week.Independence USA PAC spent $4.5 million during the 2018 cycle in support of Rep. Harley Rouda, D-Calif., who endorsed Bloomberg last month. Rouda ran a heated contest to unseat the incumbent, former congressman Dana Rohrabacher, and won in a landslide.Evertytown and Independence USA PAC, which together spent more than $43 million supporting Democrats in 2018 Congressional races, played a critical role in competitive contests. Meanwhile, Bloomberg himself poured tens of millions of dollars into other major liberal groups that have backed Democrats over the years, which supported a number of other House Democrats who’ve endorsed Bloomberg.Bloomberg is also one of the biggest donors to the Democratic Party and major party-linked super PACs spending to elect Democrats to Congress. Just in December, Bloomberg donated $10 million to pro-House Democratic group House Majority PAC and $5 million to the new Stacey Abrams-linked group, Fair Fight. In November, he gave $800,000 to the Democratic Grassroots Victory Fund, a Democratic National Committee-linked fundraising vehicle, more than $300,000 of which went to the DNC directly.Now, Bloomberg is reaping returns on those high-dollar investments in the form of endorsements.Philanthropic endeavorsThere’s a long history of back-scratching in politics, with politicians employing committees known as leadership PACs to dole out contributions to political allies and colleagues. But given his wealth, Bloomberg is operating on a different level.Bloomberg Philanthropies has contributed billions of dollars to projects around the world, ranging from the arts to the environment. In recent years, big-money grants have been awarded to mayors of progressive cities to launch innovative projects.Less than three months into his presidential bid, Bloomberg has already scored endorsements from nine current mayors whose cities benefited directly from Bloomberg Philanthropies.Bloomberg engages with cities through several programs, awards and grants. Most notably, perhaps, is his leadership program at Harvard called the Bloomberg Harvard City Leadership Initiative, a “yearlong education and professional development program designed exclusively for mayors,” according to its web page.Not everyone who participated in the program has returned to support Bloomberg’s bid. One participant — former South Bend, Indiana, Mayor Pete Buttigieg — accepted a $1 million grant from Bloomberg’s Mayors Challenge in 2018 to help the city’s efforts to promote affordable transportation for low-income residents.Now Buttigieg and Bloomberg are rivals. The two former mayors have largely steered clear of one another, but in an interview with ABC News’ Jonathan Karl earlier this month, Buttigieg leveled veiled criticism at Bloomberg, whose ad spending has left traditional retail politics out of his campaign’s playbook.”I believe in earning votes the old fashioned way,” Buttigieg told Karl. “Going into diners, going into backyards, going into middle school gyms and making your case.”But others have lined up behind the billionaire. San Francisco Mayor London Breed graduated from the Harvard program in 2019. Bloomberg also has invested millions in San Francisco’s arts, innovation and management program in recent years.Breed endorsed Bloomberg in January.Bloomberg’s Harvard program counts among its graduates the mayors of Stockton and San Jose, California, and Charlotte, North Carolina — all of whom have since endorsed him.Charlotte Mayor Vi Lyles, who endorsed Bloomberg on Thursday, won his American Cities Climate Challenge in 2018. As one of the challenge’s winners, Charlotte was set to receive financial assistance and training for city staffers — all paid for by Bloomberg.As part of its 2019 What Works Cities Certification initiative, which recognizes cities for data- and evidence-backed decision making, mayors in three of the seven cities awarded funding from Bloomberg Philanthropies — Washington, D.C., Louisville, Kentucky, and Memphis, Tennessee — have endorsed Bloomberg’s presidential bid.In Houston, after Hurricane Harvey hit the Gulf Coast, Bloomberg Associates, which collaborates with municipal leaders, worked closely with the city to “respond and deliver services to people in need by quickly setting up recovery centers,” according to Bloomberg Philanthropies’ most recent annual report.Bloomberg is also “now working with Mayor Sylvester Turner and the Houston Health Department to advance the goals of My Brother’s Keeper: improving early childhood education, building skills to contribute to the workforce, and reducing crime and violence.”Turner endorsed Bloomberg on Thursday.Copyright © 2020, ABC Audio. All rights reserved.