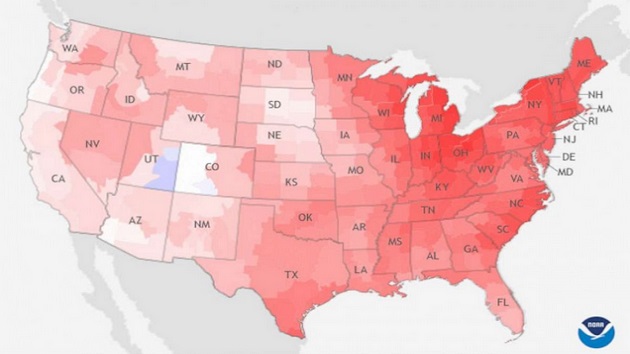 (NEW YORK) — Last month has been named the hottest January in 141 years of recorded climate history, according to the National Oceanic and Atmospheric Administration.The global land and ocean surface temperature in January was the highest on record for the month at 2.05 degrees Fahrenheit, surpassing a record set in 2016, NOAA scientists said in a press release Thursday. No land or ocean areas had record cold January temperatures.The four warmest Januarys documented in the climate record have all occurred since 2016, while the 10 warmest have occurred since 2002.January 2020 also marked the 44th consecutive January and the 421st consecutive month overall with temperatures above the 20th century average, according to the release.Record-warm temperatures were experienced across parts of Scandinavia, Asia, the Indian Ocean, the central and western Pacific Ocean, the Atlantic Ocean, and Central and South America.In addition, polar sea ice coverage remained smaller than normal and Arctic sea ice coverage was 5.3% below the average between 1981 and 2010. Snow coverage in the Northern Hemisphere was also below the 1981 to 2010 average.The U.S. felt widespread warmth during the month of January, which marks the third time ever that nation-wide temperatures were warmer than average, NOAA announced earlier this week.”January 2020 was the fifth-warmest January on record for the Lower 48 (aka “the contiguous United States,” or CONUS),” according to the National Oceanic and Atmospheric Administration climate.gov.The monthly climate update showed that in the last 20 years, warmer average temperatures recorded in this climate division is a rarity — happening only two other times, in 2006 and 2012.The first month of the year, on average, is the coldest of the year, but in 2020 a small handful of CONUS climate divisions were warmer than average.”The only climate divisions in the CONUS that were cooler than average were in eastern Utah and southern Colorado,” the government agency reported. “Alaska, meanwhile, marched to its own January drum, with colder-than-average temperatures across most of the state.”The average temperature over the 20th century was 30.12 degrees Fahrenheit, making it the only month of the year with a sub-freezing average temperature.In the past three decades, NOAA reported that January temperatures have warmed significantly.”Averaged over the entire historical record (1895-2020), January temperature has increased by 0.2 degrees F per decade,” NOAA climate.gov said. “But in reality, virtually all of that change has come in the past 30 years.”With the exception of one month of the five colder-than-average Januarys, the average January temperature from 1991-2020 was recorded just above freezing at 32.35 degrees F. Copyright © 2020, ABC Audio. All rights reserved.

Allegations of divorce controversy for the ‘Da Vinci Code’ author
Women in public health facing pushback, threats for coronavirus response
Spas are reopening amid COVID-19: Here are the rules
Pence’s Arizona trip was delayed due to Secret Service agents testing positive for COVID-19
‘The President’s Daily Briefing’: How the top secret intel document is put together
Coronavirus updates: Trump says increase of cases is ‘great news’