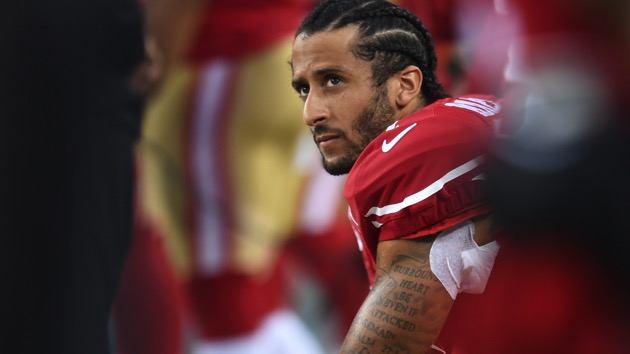 (NEW YORK) — More than three years after his silent protests rocked the NFL and the nation, Colin Kaepernick is writing a memoir about his activism which he hopes will “inspire others to rise in action.””My protest was the culmination of years of thought and experiences, of learning and unlearning,” Kaepernick said in a statement. “I want to tell the story of my evolution, and the events that led me to protest systemic oppression, in hopes that it will inspire others to rise in action.”The former quarterback for the San Francisco 49ers began taking a knee during the national anthem at games in 2016 as a way to protest police brutality against black people in the U.S. His silent protests sparked a national conversation, and even President Donald Trump weighed in.After playing six seasons with the 49ers, and leading the team to the 2013 Super Bowl, Kaepernick severed his contract in 2017. He has not signed with a new team since.He is releasing the memoir this year through his newly-formed publishing company, Kaepernick Publishing, to “reinforce the importance of Black ownership,” according to a statement.He is also partnering with Audible, which will exclusively release the audio version, to create additional original audio projects with other authors and influential figures.Kaepernick added that he hopes to use the partnership between his publishing company and Audible to “elevate Black and Brown voices who can empower future generations.”Rachel Ghiazza, the SVP of content acquisition and development at Audible, said Kaepernick “takes listeners through the pivotal moments and experiences that inspired a national debate and cultural movement.”Kaepernick has previously been vocal about his desire to return to the NFL and filed a grievance against league owners in 2017, alleging they colluded to ensure he remains unsigned. The lawsuit was settled in February 2019.Copyright © 2020, ABC Audio. All rights reserved.