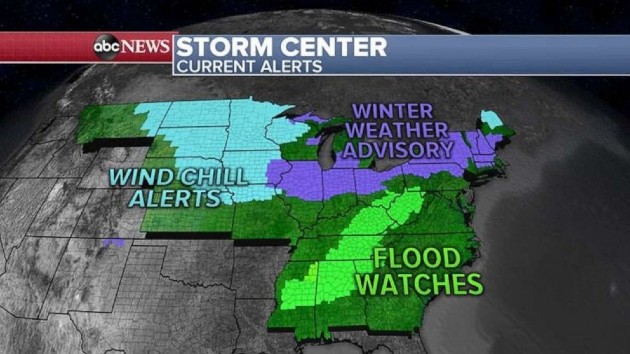 (NEW YORK) — An Arctic cold front from the north and a storm system from the south are joining, bringing snow, ice and heavy rain and strong thunderstorms to the East Coast Thursday. Already, this messy winter weather has brought whiteout conditions to the northern Plains where in North Dakota winds gusted to more than 60 mph, creating what is known as a ground blizzard. To the South, severe thunderstorms with damaging winds moved through Alabama and Tennessee, producing damage to homes and uprooting trees. In these storms, winds gusted to 76 mph in northern Alabama.Rainfall totals since the weekend have been near 10 inches in the South and that pushed many rivers and streams over their banks, flooding nearby neighborhoods and roads. As of Thursday morning, 30 states from Montana to Massachusetts are under snow, flood and wind chill alerts. On Thursday, the combined Arctic cold front and southern storm will continue to move to the East Coast, bringing strong to severe storms to the Carolinas with heavy rain from Washington D.C. to Boston. To the north, in New England and Western New York, some areas could see up to 6 inches of snow.This storm will not last long — by Thursday afternoon, the heavy rain is gone from the Northeast and snow will end in New England. Lingering strong to severe storms are expected in the Carolinas through Thursday afternoon. The big story after the current storm system will be the coldest air of the season, which is moving into the Midwest and the Northeast. Wind chill alerts have been issued from Montana to Missouri, where wind chills can be as low as -50.The Arctic air will move into the Northeast on Friday, bringing the winds chills below zero in Western New York and Pennslyvania and into New England. Wind chills will be near zero in Boston and near 10 degrees in New York City. Since it’s been so mild this winter, this will be a major shock to the sense, so dress warm and protect your skin from frostbite.

The push for electric vehicles may be killing sedans for good: Experts
GOP-led review of Arizona ballots reaffirms Biden’s win
Harris interview with ‘The View’ delayed after co-hosts test positive for COVID-19
Generational wealth implications: Black and Latino-owned homes are more likely to be undervalued
Nick Cannon teases possibility of having more children: “My therapist says I should be celibate”
‘The View’ hosts leave mid-show due to testing positive for COVID-19, miss Vice President Harris interview