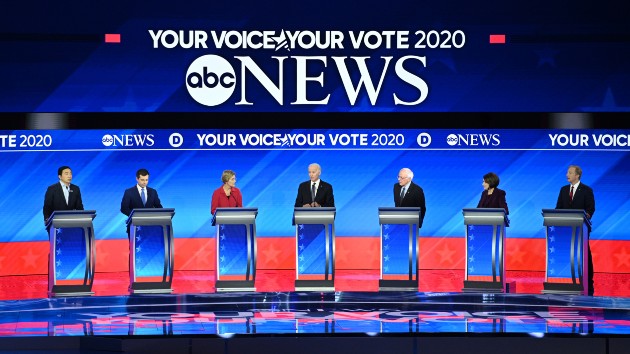 (MANCHESTER, N.H.) — In the final sprint ahead of Tuesday’s first-in-the-nation primary contest in New Hampshire, potentially the first decisive outcome this cycle after the tumultuous Iowa caucuses, the candidates have been barnstorming the state to outline their vision for the country, rebuke President Donald Trump, call for party unity and make more overt contrasts with their rivals.The primary is set to take place only eight days after the contest in Iowa — caucuses which were thrown into turmoil due to “inconsistencies” in reporting results. The state Democratic Party ultimately projected former South Bend, Indiana, Mayor Pete Buttigieg the winner of the caucuses Sunday night, awarding him two more delegates than his closest competitor, Vermont Sen. Bernie Sanders — setting up a bitter fight between the two in New Hampshire.Under pressure to excel in the Granite State amid a fiercely competitive race, the candidates have been camping out in the state since early last week, spending much time openly criticizing their rivals’ records and experience.While Buttigieg and Sanders battle it out for the top spot in the primary, Massachusetts Sen. Elizabeth Warren and former Vice President Joe Biden are jockeying for a last-minute boost, as both have found themselves in a tight race for third and fourth place in recent polling.But New Hampshire is also crowded by 11th-hour momentum from Minnesota Sen. Amy Klobuchar, as well as a slate of lower-tier contenders vying to drain some support from the top two tiers, including Colorado Sen. Michael Bennet, Hawaii Rep. Tulsi Gabbard, former Massachusetts Gov. Deval Patrick and entrepreneur Andrew Yang.Since Iowa dealt a blow to Biden, he has intensified his attacks over the last few days on his most immediate rivals to defend his electability argument, going after Buttigieg for his lack of experience and inability to build a diverse coalition, consisting of a large stock of African American support, and Sanders, a self-described “Democratic socialist,” for his embrace of policies he argues will hurt candidates down ballot.”I congratulate Pete. I congratulate Bernie, they did a great job,” Biden told supporters in Hampton Sunday. “They were really well organized, better organized than we were in Iowa…well, not a single person has won without overwhelming support from the black community.””So here’s the deal. They may very well, they may be able to get more votes in the African-American community, but right now I am far ahead of everybody in the African American community because guess what, it’s the base of the Democratic Party. And so, it remains to be seen,” he continued.But Sanders — who enters Tuesday’s contest with a slight edge, as his home state of Vermont neighbors New Hampshire — hasn’t shied away from assailing Buttigieg either, repeatedly knocking him for his high-dollar donor base as the once little-known mayor closes the gap between him and Sanders in the lead up to Tuesday’s primary.”Now I like Pete. He’s a smart guy. He’s a nice guy, but if you are serious about political change in America that change is not going to be coming from somebody who gets a lot of money from the CEOs of the pharmaceutical industry,” Sanders said during a Saturday afternoon event in Dover.In the meantime, Buttigieg has sharpened his attacks on Sanders over the costs of his “Medicare for All” plan, insinuating that Sanders’ pitch is unrealistic.”I certainly think there’s a very clear contrast between my approach and my friend Sen. Sanders approach,” he said to ABC News’ Senior Congressional Correspondent Mary Bruce on Monday in Plymouth.”Look, candidates have a responsibility to explain how we’re going to unify and how we’re going to get things done, and when there is a hole in Sen. Sanders plan, financially, that’s bigger than the entire size of the United States economy. I think it’s an example of the kind of politics that frustrates people, big promises and all of it,” he said.Warren, too, has a home-state advantage from nearby Massachusetts, but has avoided directly criticizing her opponents, only taking veiled jabs at Buttigieg for his big-dollar donors, and instead focusing on her record of overcoming steep odds to argue she can take the fight to Trump come November.”The way I look at this, I’ve been winning unwinnable fights pretty much all my life — we persist and we win,” Warren said Saturday in Manchester. “There are a lot of people who’ve said we can’t do it… the way I see it, they’re going to keep saying that right up until we get in the fight – we persist, and we win.”And for Klobuchar, who has injected a last-minute jolt into an unsettled race by garnering record crowds at her New Hampshire rallies in the final days and pulling in a massive fundraising haul after Friday’s debate, she has been staying on the sidelines of the back-and-forth, letting her unexpected bump of momentum speak for her campaign.”We have had this incredible journey over the last few days in New Hampshire,” she said before one of her largest crowds to date in Manchester Sunday. “I think that is the New Hampshire tradition. It is yes, about get-out-the-vote rallies like this, but it is also going to places where not just it’s comfortable but where it’s uncomfortable, by reaching out to people who maybe stayed home in 2016…Or maybe some people voted for other candidates, or maybe even some people that voted for Donald Trump. And I’m going to start with that. Because what we need right now is a candidate for all of America, not just half of America.”

Obama hits campaign trail ahead of gubernatorial elections in Virginia, New Jersey
Amazon workers in Staten Island say they’re planning to file for union election
Snoop Dogg joins the Harlem Globetrotters for the first NFT sitcom
Alec Baldwin posts about his “shock and sadness” after firearms mishap that left cinematographer dead
Chance the Rapper and Common call for Illinois to restore discretionary parole for life sentences
In push to get deal, Biden pulls back curtain on spending negotiations with Democrats