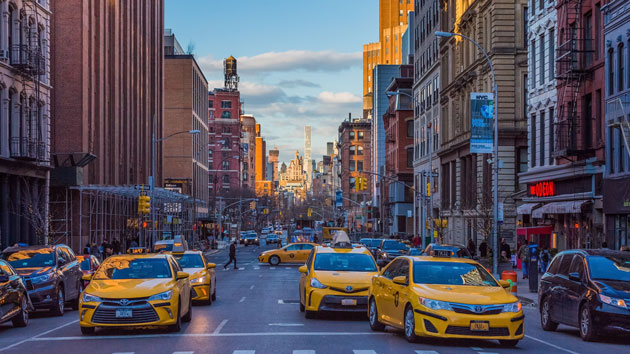 (NEW YORK) — New York City officials and advocates proposed Friday that its yellow cab drivers, who are struggling with growing debt from taxi medallions that have plummeted in value, adopt surge pricing to compete with ride-sharing companies including Uber and Lyft.The city’s Taxi Medallion Task Force, composed of City Council members, taxi workers rights groups, debt consultants and other representatives, released its first report detailing how for-hire competitors have affected the yellow cab industry.Each licensed cab needs a medallion to operate, and in the 1990s and 2000s big bets backed by big loans drove up prices. In 2012, medallions sold for an average of $1.25 million, but that dropped to $188,000 by 2018, according to the report.The 76-page report said at least 950 medallion owners have filed for bankruptcy, and the financial burdens have led to some of the drivers taking their own lives.”During our discussions, it became abundantly clear that the medallion taxi industry in our city is in a state of crisis, and the time to take urgent, bold action to remedy the situation is now,” City Councilmen Ydanis Rodriguez and Stephen Levin, chairs of the task forces, wrote in a letter to Mayor Bill de Blasio Friday.The report, which was produced after six months of work, analysis and interviews with stakeholders, made several recommendations to help the taxi drivers, including an evaluation of fares. The task force noted that passengers are willing to pay more for app-based car services, including surge pricing, in exchange for the convenience of a guaranteed pick-up.The report called for a study on the economic impact of giving yellow cabs the option to adjust fares at different times.”Any changes to the fare have the potential to impact passenger demand, a driver’s earning potential, and the ability to pay an owner for use of the vehicle,” the report said.Another recommendation called for a $600 million private-public fund that would pay off some of those drivers’ medallion debts.”Private investment funds are already purchasing distressed medallion loans at a discount … from lenders who are willing to take a loss in order to get the distressed loans off their balance sheets,” the report said.A spokeswoman for de Blasio said in a statement the public-private model looked promising.”Our top priority,” said Olivia Lapeyrolerie, “is ensuring that hardworking drivers can make a living. There are new ideas out of this task force that could make a real difference.”Copyright © 2020, ABC Audio. All rights reserved.