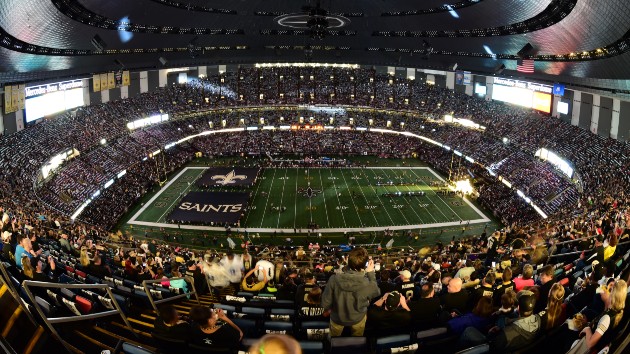 (NEW ORLEANS) — Advocates for victims and survivors of sexual assault rallied outside the New Orleans Saints’ practice facility Wednesday and demanded the NFL team come clean about the PR advice it had provided the New Orleans Archdiocese over Catholic priests suspected of abuse.Attorneys representing two dozen anonymous victims in a suit against the archdiocese said last week that they found documents that indicated the Saints’ communications team worked with the diocese to help with its messaging about the sex abuse scandal.Members of the church advocacy group “Survivors Network of those Abused by Priests,” or SNAP, held up homemade signs outside the team’s Metairie, Louisiana, facility and demanded they release the reported 300 email conversations.“If they don’t have anything to hide, then they should release all of the emails to the attorneys,” New Orleans SNAP leader Kevin Bourgeois said at a press conference Wednesday.A spokeswoman for the Archdiocese of New Orleans declined to comment citing the ongoing litigation.The Saints released a statement to ABC News saying the archdiocese reached out to them for help on media matters before the church released a list in November 2018 of clergy members accused of sexually abusing a minor.“The advice was simple and never wavering. Be direct, open and fully transparent, while making sure that all law enforcement agencies were alerted,” the emailed statement read.The team’s representatives added that it supports the victims and they “remain offended, disappointed and repulsed by the actions of certain past clergy.” The representatives said they have not asked for the emails to be withheld in the current court case.“Until the documents are admitted into evidence at a public trial or hearing in the context of relevant testimony by persons having knowledge of the documents and the events to which they pertain, the use of the documents should be limited to the parties to the case and their attorneys,” the Saints said in its statement.Bourgeois, who says he is a survivor of clergy abuse, said he and other victims feel that they are up against tougher obstacles for justice when they see the church allying with big corporations.“We are standing together for survivors and sending a strong message to them,” he said.The Saints said it has reached out to SNAP and other victims’ groups and invited them to meet to discuss the matter. Bourgeois said he looked forward to voicing his concern to the team in person. Copyright © 2020, ABC Audio. All rights reserved.