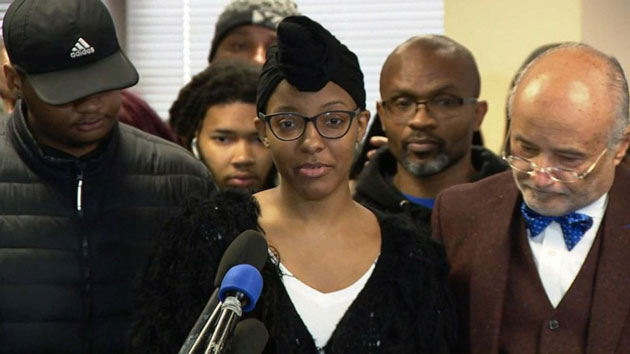 (WASHINGTON) — The mother and two children of an African American man killed when he was shot seven times by a Maryland police officer while sitting handcuffed in front of a police cruiser spoke out on Thursday to demand swift justice for what their lawyer called “one of the worst incidents in American history.”The family of William Howard Green, 43, of Washington, D.C., said that while they are relieved that the Prince George’s County police officer who shot him has been charged with murder, they questioned how he was allowed to be a police officer after officials confirmed he was involved in a previous fatal shooting that is being reviewed.”I am here for my son, William Green,” the victim’s tearful mother, Brenda Green, said during a news conference Thursday. “He needs justice because it’s just not right. I love and miss my son. I will not see my son again.”William Green’s son, William Jr., and daughter, also named Brenda, spoke at the news conference held at Mt. Joy Baptist Church in Oxon Hill, Maryland.”I am the true definition of a daddy’s girl who no longer has her daddy with her,” the daughter said. “I dreamt of the day my daddy could be able to walk me down the aisle and I wanted him to be able to see his future grandchildren. But that day will never come now.”Cpl. Michael Owens, a 10-year veteran of the Prince George’s County Police Department, was arrested on Tuesday and charged with second-degree murder and manslaughter.”It’s a bad day for this family, and we’re here to demand prompt and thorough justice for this family,” said William H. “Billy” Murphy, Jr., attorney for the Green family.”This has to go down as one of the worst incidents in American history and it has shocked the nation,” said Muphy, who also represented the family of Freddie Gray, a black Baltimore man whose 2015 death while in the custody of police led to the charges being filed against six officers. The officer charged in Grays death were all eventually acquitted.Owens, who is also African American, appeared at a hearing on Wednesday at the Prince George’s County Circuit Court, where a judge denied him bond, saying he is a danger to the community.Defense attorney, Jonathon Scruggs, had asked that Owens be released without bond and described the officer as an ordained minister who is active in his church.”This is not somebody off the street who is alleged to have committed a violent crime,” Scruggs said in court.Prince George County State’s Attorney Aisha Braveboy said a grand jury would be convened to decide the final charges Owens should face.Green was shot to death around 7:30 p.m. on Monday when Owens and another officer responded to a report that Green was involved in a traffic accident in Oxon Hill, according to police.Owens and the other officer, who is not facing charges, initially claimed they suspected Green was under the influence of PCP, or angel dust, and placed him under arrest, according to an initial statement released by the Prince George’s County Police Department.But during a news conference Tuesday night, Prince George’s County Police Chief Hank Stawinski said, “We do not believe PCP was involved.””I am unable to come to our community this evening and provide you with a reasonable explanation for the events that occurred,” Stawinski said. “I also want to be clear, there are no circumstances under which this outcome is acceptable and I want to extend my heartfelt sorrow and sympathies to the Green family.”He said Green was handcuffed with his arms behind his back and placed in the front seat of Owens’ police cruiser. At some point, Owens got in the driver seat of the cruiser and shot Green seven times, killing him, police officials said.Stawinski said neither Owens nor the other officer who responded to the scene had body cameras.Investigators were initially told that Green was shot during a struggle that ensued in the police cruiser and that independent witnesses corroborated that scenario. But Stawinski said, “That was not corroborated.”Stawinski said Green was placed in the front seat because Owens’ police cruiser did not have a partition separating the front seat from the back seat.”If you place them in the back seat of that car, that person can potentially attack that officer,” Stawinski said.The Prince George’s State Attorney’s Office confirmed that Green was involved in the Dec. 19, 2011, fatal shooting of Rodney Edwards in Landover, Maryland, and that prosecutors are reviewing the evidence in that case. At the time of Edwards’ shooting, police officials said Owen was leaving a Toys for Tots event at police headquarters in Landover when he saw Edwards lying in the grass on the side of a road and stopped to check on him.During the encounter, Owens claimed that Edwards allegedly pulled a gun, prompting Owens to shoot him several times. The shooting was eventually declared justified.On Thursday, Murphy said he wants the State Attorney’s Office to reopen the investigation of Edwards’ shooting.”We’re asking that there be a thorough investigation not only into the [Green] incident but into the officer’s past uses of force,” Murphy said. “We ought to look at the police policies which have let this officer continue to serve given his capacity to do what he did two days ago.”Murphy also chastised the Prince George’s County Police Department for failing to outfit police officers with body cameras. He said police have resisted getting the equipment and that most officers in the county do not have cameras.“I’m told it’s because there’s not enough money in the budget to get them all cameras,” Murphy said.Prince George’s County Executive Angela Alsobrooks said funding for body cameras for all patrol officers in the county has been included in the current budget.Alsobrooks said she has also directed Stawinski to order an independent review of the police department’s training practices and methods “to ensure that an incident like this never ever has the opportunity to occur again.”