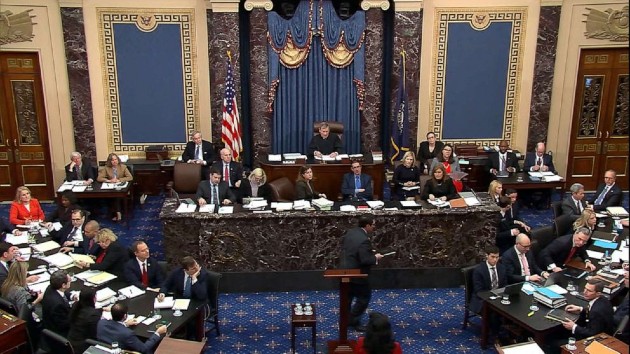 (WASHINGTON) — President Donald Trump’s Senate impeachment trial will enter a new phase Wednesday, when senators will begin up to 16 hours of questioning the House impeachment managers and the president’s legal team about the charges against Trump at 1 p.m.After sitting at their desks in silence for the opening arguments of the trial, senators — still prohibited from speaking — will submit questions written on paper slips to Chief Justice John Roberts, who will read them aloud to the chamber.The questions, which will alternate between Republicans and Democrats, will be directed at either the managers or Trump’s legal team, under the name of the inquiring senator. Senators may not direct questions at their colleagues.The questioning, set to take place over Wednesday and Thursday, gives both sides one last opportunity to address the chamber before senators begin considering motions, including on the question of witnesses — an issue at the center of events on Capitol Hill following reports about the testimony former national security adviser John Bolton could offer the Senate if subpoenaed to appear.”All senators will hear the president’s advocates and the House managers for two days,” said Sen. Chris Coons, D-Del., who, like other colleagues, began drafting questions during the opening arguments. “That will be the final word before we actually decide to work on that question.”During the impeachment trial of President Bill Clinton, Chief Justice William Rehnquist asked that questions be answered in less than five minutes. Roberts, who has presided over the Trump trial, read Rehnquist’s directive on Tuesday, and said, “I think the late chief’s time limit was a good one and would ask both sides to abide by it.”Lawmakers have wide latitude in composing their questions. Sen. Josh Hawley, R-Mo., will submit questions about impeachment manager and House Intelligence Committee Chairman Adam Schiff and his staff’s interactions with the intelligence community whistleblower who filed the complaint that helped prompt the Ukraine inquiry, along others related to former Vice President Joe Biden, his son Hunter Biden and Ukraine.Democrats, for their part, are expected to press the Trump legal team on perceived weaknesses in their defense of the president and continue to make the case for witnesses in the trial before they force votes on motions for additional testimony and records.They could also raise questions about what White House lawyers knew of Bolton’s account of conversations with the president. The former Trump adviser submitted a manuscript of his forthcoming book to the White House for a classification review.According to The New York Times, Bolton wrote that Trump told him over the summer that he wanted to continue freezing military aid to Ukraine until the country’s government delivered on his push to investigate the Biden family.The allegations that Trump tied the aid to investigations, which the president has denied, would undermine the White House’s defense of the president in the impeachment trial.The White House has told Republican senators that the lawyers arguing on Trump’s behalf in the Senate, including White House counsel Pat Cipollone, had no knowledge of Bolton’s account.Both the managers and the president’s lawyers could also rely on friendly senators to submit questions that help them reinforce their arguments to lawmakers.The Senate could move on to motions and the question of whether to consider additional witnesses later this week.Senate Majority Leader Mitch McConnell, speaking to Republican senators in a closed-door meeting Tuesday evening, said he did not yet have the votes to block a vote to consider witnesses.A senior White House official told ABC News that the president’s defense team still believes they will be able to defeat the measure to call witnesses.”It’s still a hard vote, but we are working hard. It’s a long time until Friday,” the official said.The Senate’s number two Republican, John Thune, said he thought the GOP conference was unified behind a plan that would see more witnesses called than the Trump team would want, in exchange for a witness like Bolton.But Thune added that it was proving difficult to figure out how to manage what could become an unwieldy process.