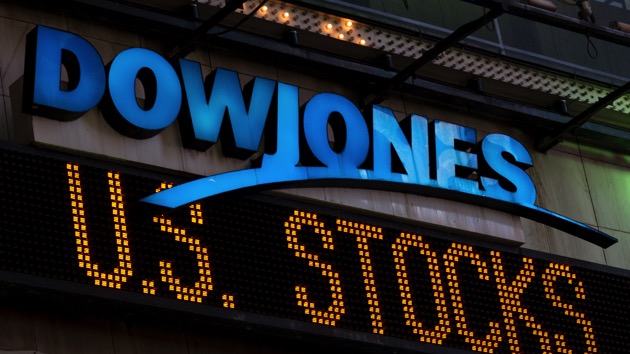 (NEW YORK) — The Dow Jones Industrial Average was down more than 400 points as trading began on Monday, as uncertainty over the spread of the coronavirus has rattled global markets.The S&P 500 and Nasdaq also took a tumble Monday morning, after authorities over the weekend announced a fifth case of the virus in the U.S. and the international death toll soared.”Hopes that the virus would be contained were squashed over the weekend,” Ryan Detrick, the senior market strategist for LPL Financial said in a commentary Monday. “Although historically these outbreaks have been buying opportunities, the bottom line is investors are taking a sell first and ask questions later approach right now.”The sharp decline in the markets was dragged down in part by airlines and travel companies. United Airlines Holdings and Delta Airlines shares tumbled by more than 4% Monday morning. Stock for Wyndham Destinations and Marriott International also fell by 3%.Shares for consumer companies with exposure in China such as Apple, Disney and Nike also fell slightly Monday.”Investors are selling first and asking questions later. The Chinese economy — and possibly the world economy — will take a hit in the short run and lower prices are a rational response to the increasing spread of the corona virus,” Chris Zaccarelli, the chief investment officer at the Independent Advisor Alliance, said in a commentary Monday.How quickly a vaccine can be developed and how effectively governments will be able to prevent the spread of the virus “will determine how large the economic impact will be,” Zacarelli added.”But once it is contained and people go back to traveling and spending as they did previously, the economy will rebound accordingly; markets will anticipate this and start moving higher again well in advance of that bottom,” he added, citing the market rebound following the SARS outbreak in 2003. Copyright © 2020, ABC Audio. All rights reserved.