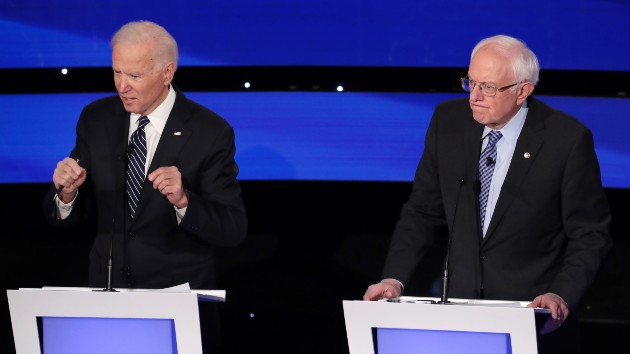 (WASHINGTON) — Former Vice President Joe Biden and Sen. Bernie Sanders may have made amends on a Sanders surrogate’s claims in an op-ed that Biden was “corrupt,” but the two presidential candidates’ feud over Social Security is far from over as new videos released from both campaigns show. Biden and Sanders have butted heads on the issue of Social Security, after the Sanders campaign highlighted a video that appeared to show Biden agreeing with former House Speaker Paul Ryan on privatizing Social Security, but took his comments out of context. Biden called the video “doctored” and asked the senator’s campaign to “disown” the video. However, the Sanders’ camp doubled-down on their criticism, pointing to comments from Biden throughout his nearly 40-year career in the Senate discussing freezes to the entitlement program, arguing it was Biden who was trying to “doctor” his record.The back and forth continued Tuesday night, with a new social video posted to Biden’s Twitter, sharply criticizing Sanders for the “barrage of negative attacks.” “As Democrats we can’t launch dishonest attacks against fellow Democrats. We have to beat Donald Trump. Now Bernie’s campaign has launched a barrage of negative attacks against Joe Biden and they’ve even accused Joe Biden of supporting Paul Ryan’s cuts to social security. Bernie’s campaign is not telling the truth,” the video said, going on to defend Biden’s record on Social Security.The sharp criticism prompted a response from the Sanders campaign, arguing that the video complaining of Sanders’ negative tactics was actually the first negative ad of the campaign. “Joe Biden just released the first negative ad of the 2020 Democratic primary, and let’s be clear about why: he’s trying to distort his decades-long record of proposing and voting for cuts to Social Security benefits for millions of people. Joe Biden is no defender of Social Security, and a negative ad won’t help him outrun his record,” Sanders’ campaign manager Faiz Shakir said in a statement. A Biden official tells ABC News that the video was not an ad, but a social video with no money behind it, though it was certainly in response to Sanders’ attacks on the former vice president’s record. Sanders too responded to the video with a video of his own, using audio of Biden on the Senate floor in 1995 discussing his past support for freezes on government spending programs like Social Security. “Let’s be honest, Joe. One of us fought for decades to cut Social Security, and one of us didn’t. But don’t take it from me. Take it from you,” Sanders tweeted along with the video.Biden himself responded further to the Sanders’ charges in an interview on MSNBC’s Morning Joe on Wednesday. “The facts are that I have a 100% rating from the groups that rate social security, and those who support Social Security. I think, at a minimum it was taken out of context what they did,” Biden said. When pressed further on the question of cutting Social Security benefits, Biden reiterated that he would not pursue that policy as president, going on to hit back against Sanders’ past opposition to gun control legislation as an example of a blemish on the Vermont senator’s record. “It’s like my going back and pointing out how Bernie voted against the Brady Bill five times while I was trying to get it passed when he was in the House,” Biden said, referencing a law passed in 1994 that requires a waiting period for handgun purchases and background checks on those who wish to purchase handguns. “Or how he voted to…protect gun manufacturers as the only group in America you can’t sue. I mean he’s made up for that, he’s indicated that was past.”While Sanders did oppose certain gun control measures early on in his career, he has since come out in support of an array of legislation aimed at curtailing gun violence. “I’m running for president because we must end the epidemic of gun violence in this country. We need to take on the NRA, expand background checks, end the gun show loophole, and ban the sale and distribution of assault weapons,” Sanders said in the video announcement that launched his 2020 presidential bid. The simmering tensions between the two men come in the pivotal final weeks leading up to the Iowa caucuses, and as two national polls of the Democratic primary show the two men at the top of the 12-candidate field. A CNN/SSRS poll released Wednesday showed Sanders with a 3-point lead over Biden for the nomination, within the poll’s margin of error, while a Monmouth poll showed Biden topping Sanders by 7 points with just 12 days to go until the primary officially begins. Copyright © 2020, ABC Audio. All rights reserved.

Traveling over the holidays? Experts say take advantage of vouchers and lack of change fees
Police investigate ‘suspicious’ death of mother and child at Padres stadium in San Diego
Three dead, over 50 injured in Amtrak train derailment
What is Title 42? Amid backlash, Biden administration defends use of Trump-era order to expel migrants
3 dead in Amtrak train derailment in Montana
Culture thrives in America’s most Hispanic, Latino state: New Mexico