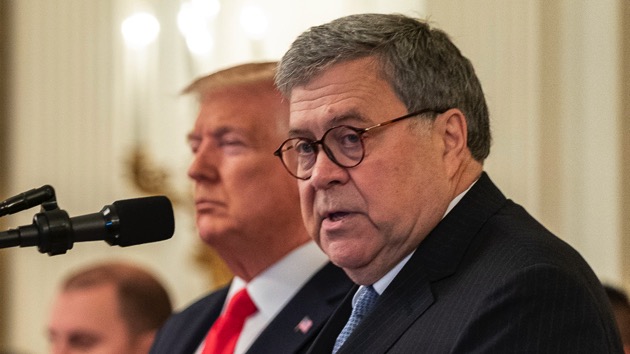 (WASHINGTON) — A lawyer for Lev Parnas, an associate of Rudy Giuliani who was indicted on campaign finance charges, called on Attorney General William Barr to recuse himself from overseeing the case, arguing it would create a “public appearance of a conflict of interest.””Due to the conflict of interest of your being involved in these matters as Attorney General, and in an effort to preserve the public trust in the rule of law, we request that you recuse yourself,” Joseph Bondy, Parnas’ attorney, wrote in a letter filed to the court on Monday.Bondy suggested the Department of Justice appoint a special prosecutor from outside the department to handle the case.In his request, Bondy outlined several examples of why the attorney general should step back, including his involvement in President Donald Trump’s Ukraine policy — as Barr was named during the president’s July 25 call with the Ukraine that sparked the impeachment storm on Capitol Hill.The New York City bar also advised Barr to disqualify himself from the case.Bondy said “evidence has been brought to light” linking Barr to not only Giuliani, the president’s personal lawyer, but other prominent GOP lawyers like Victoria Toensing and Joe diGenova, which he said creates a “public appearance of a conflict of interest.”He argued that “actual harm” was done to his client, because of perceived “delays in the production of discovery in his federal case.” In other words, Bondy said Parnas was unable to turn over documents in a timely manner in order to comply with the congressional subpoenas sent during the impeachment inquiry.The letter did not however give any details as to how the discovery was delayed.”This conflict of interest appears to have caused actual harm to Mr. Parnas,” Bondy said, adding that his client couldn’t dig up enough evidence “in time for congressional investigators to make complete use of his material or properly assess Mr. Parnas as a potential witness.”Parnas’ attorney also said prosecutors “refused” to meet with Parnas so he could give them the information he had on Trump, Giuliani, Toensing, diGenova and “others.”The Justice Department has declined to comment. Copyright © 2020, ABC Audio. All rights reserved.