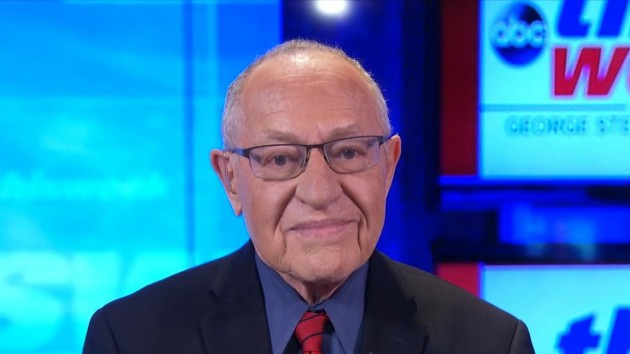 (WASHINGTON) — Alan Dershowitz, the celebrity lawyer and Harvard professor emeritus named to President Donald Trump’s legal team last week, is already facing questions about his defense of the president in light of comments he made 21 years ago about impeachment. Appearing on ABC News’ This Week with George Stephanopolous on Sunday, Dershowitz argued that impeachment of a president requires proof “of an actual crime,” and that Trump can’t be removed for abuse of power or obstruction of Congress, the two impeachment articles approved by the House last year.“It needn’t be a statutory crime, but it has to be criminal behavior, criminal in nature,” he said.Dershowitz, speaking on This Week and making the same argument in other interviews, has cited former Supreme Court Justice Benjamin Curtis, who served as President Andrew Johnson’s defense counsel in the first Senate impeachment trial in 1868, and argued on the Senate floor that the framers of the Constitution believed a president could only be impeached for criminal conduct.But Dershowitz appeared to make a very different argument in 1998 when he appeared on CNN’s Larry King Live and said impeachment didn’t require the president to commit a crime. “It certainly doesn’t have to be a crime if you have somebody who completely corrupts the office of president and who abuses trust and who poses great danger to our liberty, you don’t need a technical crime,” he said in comments unearthed by CNN. Dershowitz, a self-described liberal Democrat who said he voted for Hillary Clinton in 2016, opposed President Bill Clinton’s impeachment, and wrote a book on the subject in 1998. He also consulted with Clinton’s legal team during his impeachment.Pressed on his decades-old comments in an MSNBC appearance on Monday, Dershowitz said he was making the “same argument.” “It doesn’t have to be technical crime because at the time the framers wrote the Constitution, there was no criminal code,” he said. Dershowitz echoed that in a statement to ABC News, saying, “That’s still my position. It has to be criminal — like, akin to treason or bribery. Not abuse or obstruction.” On his role defending Trump, Dershowitz said he has a “limited role” in the Senate trial. “I’m only in the case as of counsel on the constitutional criteria for impeachment. I’m not involved in the strategic decisions about witnesses or fact,” he said. Copyright © 2020, ABC Audio. All rights reserved.

Don’t say his name: Jordan Peele brings back 90s R&B, and a whole lot of bees, in new ‘Candyman’ trailer
Sunny Hostin, Meghan McCain criticize Trump’s appointment of Pence to lead coronavirus response on ‘The View’
As he leads coronavirus response, Pence criticized for handling of HIV outbreak while Indiana’s governor
Some NYPD officers tip each other off when body cameras are on: watchdog report
University of Oklahoma promises changes after student sit-in protests use of racial slurs
Red Sox Ace Sale To Open Season On Injured List