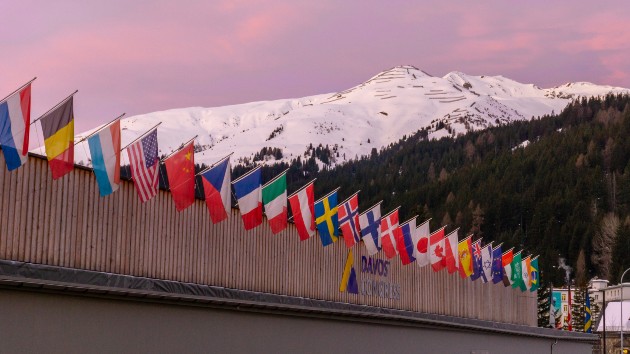 (DAVOS, Switzerland) — The world’s political and economic elite are descending on the small Swiss Alps town of Davos this week for the annual World Economic Forum meeting where they hope to set this year’s “global, regional and industry agendas.” Approximately 3,000 people will be attending this year — from President Donald Trump to German Chancellor Angela Merkel to climate change activist Greta Thunberg — and the theme is Stakeholders for a Cohesive and Sustainable World.The convention of the most powerful comes at a time, however, when global income inequality is soaring and a majority of people believe capitalism in its current form is not working. Here is what to expect from this year’s conference:‘Stakeholder capitalism’The WEF explains that this year’s theme is about using “stakeholder capitalism,” or a system where the interests of all stakeholders are weighed equally, as a means “to overcome income inequality, societal division and the climate crisis.””Business has now to fully embrace stakeholder capitalism, which means not only maximizing profits, but use their capabilities and resources in cooperation with governments and civil society to address the key issues of this decade,” forum founder and executive chairman Klaus Schwab said in a statement. “They have to actively contribute to a more cohesive and sustainable world,” he added.Issues like climate change and “fairer economies” are at the top of the agenda this year. The invitation-only guest list has expanded to welcome young activists including 17-year-old Greta Thunberg and others in addition to the usual crowd of the ultra-wealthy.The schedule is jam-packed with things to watch for. On Tuesday, Trump will be giving a special address shortly after Thunberg participates on a panel about “Averting a Climate Apocalypse.” Han Zheng, the vice-premier of the People’s Republic of China, will also speak on Tuesday afternoon. Another theme of this year’s conference will be the role of technology in our society and how it can be used “for good.”Many executives from big tech will be present: Huawei founder and CEO Ren Zhengfei will discuss “A Future Shaped by a Technology Arms Race” on Tuesday. Google CEO Sundar Pichai will speak on Wednesday. Facebook COO Sheryl Sandberg will also reportedly be in attendance this year. Capitalism ‘doing more harm than good’The gathering of the business elite comes at a time, however, when a majority of people believe that “capitalism in its current form is now doing more harm than good in the world,” according to a survey from global communications firm Edelman published Monday. Despite a strong economy on paper and low unemployment rates, a majority of those surveyed also said they did not believe they would be better off in five years’ time.CEO Richard Edelman called the findings a “trust paradox,” saying, “Since we began measuring trust 20 years ago, economic growth has fostered rising trust.” “Fears are stifling hope and long-held assumptions about hard work leading to upward mobility are now invalid,” he added. The findings shed light on a series of perceived global threats — 83% of employees globally said they are worried about job loss “due to automation, a looming recession, lack of training, cheaper foreign competition, immigration and the gig economy.” Moreover, 57% of people said they were worried about losing their “respect and dignity.” The ‘inequality crisis is spiraling out of control’This year’s conference also comes at a time when the world’s billionaires hold more wealth than 4.6 billion people, or 60% of the Earth’s population, according to a report on inequality released Monday from the nonprofit group Oxfam.The report’s findings are just “another indication that the inequality crisis is spiraling out of control,” according to Paul O’Brien, the vice president of policy and advocacy at Oxfam America. “The richest are clearly rigging our economy for themselves, starting with America’s billionaire President,” O’Brien said. “While the president of the United States is rubbing elbows in Davos with the global elite, his administration is seeking to cut food assistance to nearly a million poor people, while expanding tax loopholes and other benefits for the wealthy and large companies.” U.S. Treasury Secretary Steven Mnuchin and European Central Bank President Christine Lagarde will be among those speaking this year on the topic of creating “fairer economies,” according to the WEF website. Copyright © 2020, ABC Audio. All rights reserved.

Don’t say his name: Jordan Peele brings back 90s R&B, and a whole lot of bees, in new ‘Candyman’ trailer
Star Elisabeth Moss says ‘The Invisible Man’ is for all the “invisible” women out there
Sunny Hostin, Meghan McCain criticize Trump’s appointment of Pence to lead coronavirus response on ‘The View’
As he leads coronavirus response, Pence criticized for handling of HIV outbreak while Indiana’s governor
Some NYPD officers tip each other off when body cameras are on: watchdog report
Teacher dressed up as a black leader every day for Black History Month