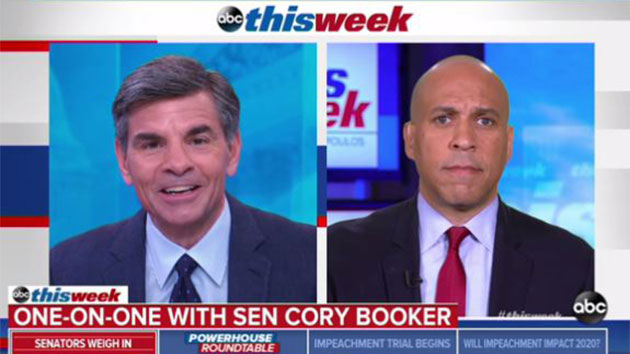 (WASHINGTON) — The historic third presidential impeachment trial resumes on Tuesday, placing senators in the unusual position of serving as both judge and jury as they close in on rendering a verdict in the case of President Donald Trump.Sens. Richard Shelby, R-Ala., and Cory Booker, D-N.J., disagreed whether the president’s conduct, forming the basis of the charges against him in the Senate trial, was an impeachable offense in separate interviews on ABC’s “This Week.”A brief filed Saturday, written by the seven House impeachment managers, asserts that President Donald Trump’s scheme to withhold $391 million in security assistance to Ukraine in order to seek the announcement of a probe to benefit him politically was “the Framers’ worst nightmare.””I don’t know that has been actually proven,” Shelby told ABC News Chief Anchor George Stephanopoulos.When pressed by Stephanopoulos whether it was OK for the president to publicly request the Ukrainian and Chinese governments to get involved in the 2020 election, Shelby said those comments from the president were “just statements — political.””The president of the United States is human,” Shelby said Sunday. “He’s going to make mistakes of judgment and everything else.” Booker, a former 2020 presidential candidate, said the president had “openly been engaging with Russians and others … to undermine our election,” calling it “a real threat to this nation.””This is preposterous that this would not be an impeachable offense, that this standard in America is now that presidents could abuse their power to help in elections,” Booker said.Trump’s legal team filed its response to the House’s brief on Saturday, echoing the president’s oft-repeated defense that he “did nothing wrong” and arguing that the articles of impeachment were “constitutionally invalid.””And the fact that we can’t even get Republicans to answer your question directly — is that behavior wrong — it is absolutely wrong,” Booker told Stephanopoulos on Sunday. Shelby and Booker were sworn in as jurors in Trump’s impeachment trial last week. The trial is set to resume on Tuesday when arguments get underway in the Senate. Both senators have acknowledged the need for a fair trial, despite disagreeing on the procedural mechanisms to achieve one.Booker said on “This Week” that he would “press for what every objective juror should press for … relevant fact witnesses coming before the Senate.”He has previously called the idea of a trial without witnesses “insane,” saying it “makes no sense” for jurors in a big trial to not hear from “firsthand witnesses that saw what happened.””I believe that we shouldn’t be afraid of any witnesses,” Shelby said Sunday, without definitively answering whether witnesses with firsthand knowledge, such as former national security adviser John Bolton, should testify.”If they’re going to add something substantive, something substantial … that’s one thing. But if they’re not going to add to what already we have, that’s another question.” This will not be Shelby’s first appearance at the impeachment trial of a sitting president. He served as a juror during the 1999 impeachment trial of President Bill Clinton, where the issue of witnesses was similarly contentious. There, senators ultimately agreed to hear testimony from three witnesses via video depositions after a vote of 56-44.Shelby acknowledged on “This Week” that he did vote to have witnesses testify in the Clinton trial.If the Senate votes to refuse witnesses in Trump’s trial, it will be the first time in U.S. history an impeachment trial has not allowed witness testimony.

Biden says there will be enough vaccine for American adults by end of May
Golden Globe winner Andra Day shares significance of winning awards as a new actress
Spike Lee to produce new HBO documentary for 20th anniversary of 9/11
Lawyer for family of girl injured in pre-Super Bowl crash speaks out: ABC News exclusive
How falling levels of COVID-19 tests could threaten pandemic fight
Thousands of students reported ‘missing’ from school systems nationwide amid COVID-19 pandemic