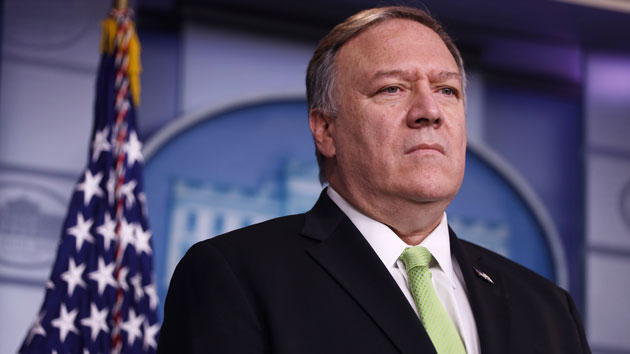 (WASHINGTON) — Secretary of State Mike Pompeo on Friday denied having knowledge of any surveillance conducted on former U.S. Ambassador to Ukraine Marie Yovanovitch — whose ouster is now at the center of the impeachment process — but he said the State Department will investigate whether any occurred.“We will do everything we need to do to evaluate whether there was something that took place there,” Pompeo said during an interview with conservative radio host Tony Katz. “I suspect that much of what’s been reported will ultimately prove wrong, but our obligation, my obligation as Secretary of State, is to make sure that we evaluate, investigate.”Ukrainian police had already announced earlier this week that they were investigating the alleged surveillance.In the radio interview, Pompeo also denied being acquainted with Lev Parnas, the former associate of Rudy Giuliani who handed over a trove of text messages and other materials to Congress that included revelations texts about a possible surveillance effort.“I’ve not met this guy, Lev Parnas, to the best of my knowledge. I’ve never encountered, never communicated with him,” Pompeo said.In text messages between Republican congressional candidate Robert Hyde and Parnas that have been made public, Hyde appeared to suggest to Parnas that he had people following Yovanovitch’s movements in Ukraine.Beyond providing the new trove of documents, Parnas has also gone public with claims that he was involved in a scheme to pressure Ukraine to launch an investigation into the former Vice President Joe Biden and his son, Hunter, who sat on the board of the Ukrainian energy company Burisma.Parnas said on CNN Thursday night that he and Giuliani’s efforts in Ukraine “was all about 2020, to make sure [Trump] had another four years.” Copyright © 2020, ABC Audio. All rights reserved.