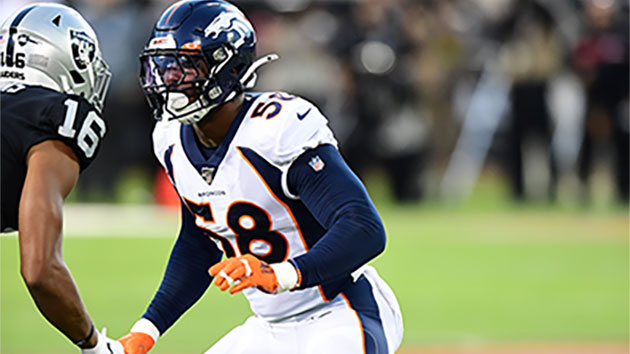 Entering his tenth NFL season, the seven-time All-Pro has missed just one game since the start of the 2015 season. He watched as his 95 consecutive games played streak was snapped this past year, when he missed one due to injury

“If it was a playoff game or something, I could’ve toughened it out,” the star linebacker tells ABC News, as he embarks on a new offseason campaign to empower others to pursue quality eye care.

Miller has long discussed publicly how his poor vision growing up affected his confidence in school, but he credits the experience for helping him develop a passion for encouraging others to become aware of issues that can affect vision.

“There are 70 million people around the world that are affected by Glaucoma,” he says, discussing his new My Glaucoma campaign. “If I can raise any awareness or any type of knowledge of it [glaucoma] that would be my ultimate goal.”

Miller wears an iconic pair of glasses while playing, and vision has never hindered his play. In fact, little has affected his on-field dominance-Miller is heading to his eighth Pro Bowl, which is played the week before the Super Bowl, and has ranked among the NFL’s leaders in sacks nearly every year he has played professional football.

While excited about his new campaign, Miller says he is disappointed the Broncos are not playing in the postseason. The Broncos have missed the playoffs every year since winning the Super Bowl four years ago.

Miller says he will watch the conference championship games this weekend though, and offered a surprising Super Bowl prediction: the underdog Tennessee Titans.

“I like the Titans,” says Miller, predicting they will defeat the San Francisco 49ers in the Super Bowl. This, despite believing the 49ers are the best team in the playoffs.

Miller says any team can win though, and concedes his bias does play a role in his prediction:

“I can’t just say the Chiefs!”

The Broncos are divisional rivals with the Kansas City Chiefs, who face Tennessee on Sunday. The 49ers, meanwhile, will host the Green Bay Packers in the NFC Championship Game.

To hear our entire conversation with Miller, which includes more on his campaign, predictions, and his thoughts on issues affecting the NFL, click here.