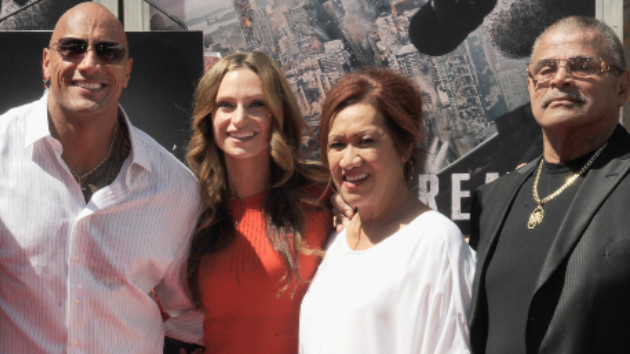 (LOS ANGELES) — Dwayne “The Rock” Johnson has broken his silence over the apparently unexpected death of his father, former wrestler Rocky Johnson. The 75-year-old WWE Hall of Famer’s death was announced on Wednesday.

Under a video of his father in the ring, with a much younger Rock watching from the stands, Dwayne Johnson noted on his Instagram, “You broke color barriers, became a ring legend and trail blazed your way thru this world.  I was the boy sitting in the seats, watching and adoring you, my hero from afar.”

The Rock hints that all wasn’t smooth sailing, calling himself, “The boy you raised with the toughest of love. The intense work. The hard hand. The adoring boy who…grew to become a man realizing you had other deeply complicated sides that needed to be held and understood.”

Johnson continues, “Dad, I wish I had one more shot to tell you, I love you, before you crossed over to the other side. But you were ripped away from me so fast without warning. Gone in an instant and no coming back. Im in pain. But we both know it’s just pain and it’ll pass…”

The lengthy post ends with, “I love you dad and I’ll always be your proud and grateful son. Go rest high.”

Bethenny Frankel returns to television with new HBO Max series “The Big Shot with Bethenny”
Drew Barrymore reveals weight struggles: “I have stood in my closet and just cried”
Warren discusses fiery Nevada debate on “The View”
Former Rep. Katie Hill breaks silence months after resigning from Congress: ‘I made the right call’
Here are the five takeaways from the fiery Las Vegas debate
Storm system brings threat for floods and snow to the South