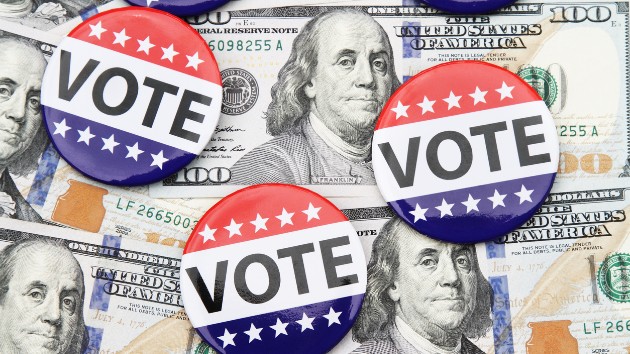 (WASHINGTON) — The Democratic presidential field and the Democratic National Committee together raked in a total of about $580 million in 2019, surpassing President Donald Trump and the Republican National Committee’s combined total of about $463 million by more than $100 million, according to a DNC spokesperson. The fundraising total from the Democratic Party came out just before six leading Democratic presidential candidates were set to take the stage for another debate in Des Moines, Iowa.The DNC will report bringing in $28 million in the fourth quarter of 2019, closing out the entire year with over $95 million. The total includes money raised through the Democratic Grassroots Victory Fund, a joint fundraising committee between the national and state parties launched in 2018, according to the DNC spokesperson. In December, the DNC raised $9.5 million, a little up from the $8 million it raised in November. For the committee, December represents its most successful online fundraising month of the year, according to the spokesperson. The DNC also had its best off-year online fundraising year in a decade. The yearly total also outpaces the party’s 2015 total — when Democrats controlled the White House — by $30 million.The DNC and the Democratic field’s strong combined year-total could provide a fresh breath of hope for the party as it enters the election year, but the DNC itself continues to fall behind its GOP counterpart in fundraising, which has brought in $72 million during the fourth quarter, boasting its fundraising advantage with the president. The spokesperson did not mention the DNC’s cash on hand, but its long-existing debt problem has likely served as a setback for the committee to stock up the war chest as it enters into the election year.Meanwhile, the Trump campaign and the RNC jointly closed out the year with nearly $200 million on hand for the start of 2020, the Republican Party announced earlier this month. RNC spokesperson Mandi Merritt called the Democrats’ announcement a “lazy attempt to save face” and that they are “at a serious disadvantage.” “The DNC is still broke and the never-ending Democrat primary is going to leave all their candidates broke,” Merritt said in a statement to ABC News. “Meanwhile, the RNC and Trump campaign have used our nearly half a billion raised to invest in the largest data driven ground game in Party history that is working around the clock to elect President Trump and Republicans up and down the ballot, and that’s what will make all the difference in 2020.” Democratic presidential contenders’ fundraising hauls remained strong in the last quarter of 2019, led by Sen. Bernie Sanders, I-Vt., who brought in a massive $34.5 million haul in the quarter.Copyright © 2020, ABC Audio. All rights reserved.