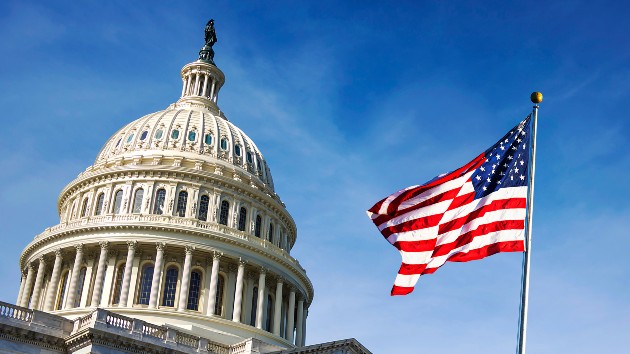 (WASHINGTON) — Ahead of a House debate and vote Thursday on a War Powers resolution aimed at limiting President Donald Trump’s ability to engage in military action against Iran, Speaker Nancy Pelosi dismissed criticism that a debate on war powers empowers Iran as “completely foolish.” “We will debate on the floor of the House,” Pelosi, D-Calif., pledged.

“We have no illusions about Iran, no illusions about Soleimani, who was a terrible person,” she said, referring to Qassem Soleimani, the top Iranian general killed in a U.S. drone strike last week on Trump’s orders. “But it’s not about how bad they are, it’s about how good we are, protecting the people in a way that prevents war and will not have us producing again and again generations of veterans who are suffering.”The resolution being voted on would reassert Congress’ authority to declare war by mandating that absent additional congressional action, the Trump administration’s military hostilities against Iran cease within 30 days.Pelosi said the House is advancing what’s called a “concurrent resolution” because it does not require the signature of the president of the United States. “This is a statement of the Congress of the United States and I will not have that statement be diminished by whether the president will veto it or not,” Pelosi said.House Minority Leader Kevin McCarthy told reporters he believes a concurrent resolution is “meaningless” and akin to inviting the soap box derby to hold an event at the Capitol. “Instead of working with the administration to make America stronger, Democrats are working against us to make us weaker,” McCarthy, R-Calif., told reporters at a news conference. “Make no mistake: today’s War Powers Resolution cannot become law. By definition, it will never be sent to the president, and it will never limit his constitutional authority to defend the American people.”As Pelosi works to rein Trump in amid tensions with Iran, the president is pushing back. Earlier Thursday morning, President Donald Trump spouted attacks directed at Pelosi, tweeting that she is “crazy” while calling on all House Republicans to vote against the War Powers Resolution on Thursday.Pressed by ABC Senior Congressional Correspondent Mary Bruce whether she believes the administration has misled the American people about an imminent attack, Pelosi said it was “disdainful” that Trump did not consult Congress and that killing Soleimani has not made the country safer. “We must avoid war,” Pelosi said. “And the cavalier attitude of this administration, it’s stunning. The president will say, ‘I inform you by reading my tweets.’ No, that’s not the relationship that our founders had in mind in the constitution of the United States when they gave power to the White House to do one thing in terms of our national security and to the Congress to declare war and to allocate resources and the rest.” “It’s a very big issue now because it’s nothing less than preventing war as we honor our first responsibility to protect the American people,” she added. During an event in the Roosevelt Room at the White House Thursday, Trump was asked by ABC News Chief White House Correspondent Jonathan Karl whether he would go to Congress to seek congressional approval to take further military action against Iran. “It would all depend on the circumstance. I don’t have to, and you shouldn’t have to because you have to make split second decisions.” Trump said. “Sometimes you have to move very, very quickly, Jon. But in certain cases, I wouldn’t even mind doing it.”Copyright © 2020, ABC Audio. All rights reserved.