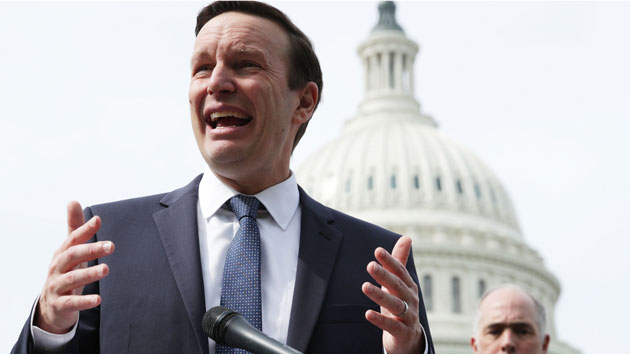 (WASHINGTON) — President Trump’s new threat to Iran in case of retaliationThe president and his aides insist that the decision to kill Qassem Soleimani was the right move and have now threatened to target 52 Iranian sites if Tehran strikes back.Susan Haigh/APSen. Chris Murphy, D-Conn., joined ABC News’ Powerhouse Politics podcast on Wednesday, echoing other claims that the United States has undergone damage since the targeting of Iranian General Qassem Soleimani.ABC News Chief White House Correspondent Jon Karl asked the senator, a member of the Foreign Relations Committee, if he believes that the nation is safer today than it was before the strike.”The answer is absolutely not. It is just catastrophic,” Murphy said. “The damage has been done to the U.S. national security since the targeting of Qassem Soleimani. I don’t think the administration gamed out how badly this would go for us.”Murphy highlighted the work that he believes would have to be done to repair the reputation of the U.S. abroad and to reconstruct nuclear agreements.”We are going to now have to engage in all sorts of repair work to try and keep our troops from being kicked out of Iraq, to try to repair our reputation with that government, to set to try to suspend or counter ISIS operations,” Murphy said. “And then to start trying to reconstruct the nuclear constraints on Iran, which just evaporated in the last four to five days.”In a statement released on Sunday, Iran announced it would no longer limit the number of centrifuges it has in production, calling it the “last key item of its operational limitations in the JCPOA,” or the Joint Comprehensive Plan of Action, as the nuclear deal is formally known. After withdrawing the U.S. in May 2018 from the nuclear deal, President Donald Trump imposed crippling U.S. sanctions, fully enforcing them in April 2019 with an end to any oil sanctions waivers.”I am certainly glad that it looks as if President Trump is going to, sort of, take what appears to be a cue from the way in which the Iranians engaged last night,” Murphy said.Trump addressed the nation Wednesday morning, hours after Iran launched missile strikes on two bases in Iraq where U.S. forces were stationed, de-escalating the crisis by threatening additional “punishing” sanctions on Iran but not immediate military retaliation.”The fact that we now have all sorts of other interests compromised in the regions now, that we have so much repair work to do … we will end up with a really weak position today, much weaker than we were just give days ago. Much, much weaker than we were at the start of the Trump administration,” Murphy said. “The president has gravely injured this nation’s security around the world.”He added, “He has made us a literal laughingstock.”On Wednesday afternoon, members of Congress were briefed with details of the nation’s original strike on Soleimani and the Iranian retaliation effort that followed, although many members argue that the White House has waited too long to brief members.”It is abnormal that Congress would have to wait five to six days in order to get briefed on an attack on a foreign country,” Murphy said. “I will be looking, you know, not only for specifics around this attack, but also why they judge the assassination of Soleimani to be the necessary post-prophylactic step.”ABC News Political Director Rick Klein also asked Murphy if he had seen any signs that the Senate could see the articles of impeachment in the coming days.”My sense is that we will get this trial underway next week. And I don’t think there is really any injustice in, you know, getting this trial started,” Murphy told Klein. “My belief is that, you know, the greatest leverage we have is inside the confines of that trial.”He said he isn’t sure the Republicans are “confident in their ability” to vote against calling witnesses to testify and “get away with it with their constituents.”My guess is that this is going to be what happens, we’ll probably open up this process next week,” he said.Copyright © 2020, ABC Audio. All rights reserved.

Justice Ruth Bader Ginsburg honored at US Capitol
Gugu Mbatha-Raw explains how she worked “to honor” Jennifer Hosten in ‘Misbehaviour’
Katilyn Bristowe gets MRI for injured ankle, says Tylenol and Advil are her “best friends” for ‘DWTS’ rehearsals
Rural moms recovering from addiction struggle to stay connected during pandemic
Ten pieces of advice for couples who have postponed their weddings to 2021
‘Lovecraft Country”s Jamie Chung talks positive fan reaction to “dream role”