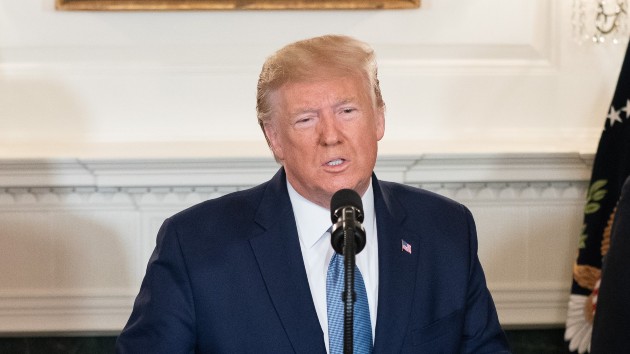 (WASHINGTON) — President Donald Trump addressed the nation Wednesday hours after Iran launched missile strikes on two bases in Iraq where U.S. forces were stationed, appearing to de-escalate the crisis by threatening additional sanctions on Iran but not immediate military retaliation.”Iran appears to be standing down which is a good thing for all parties concerned,” Trump said, as Vice President Mike Pence, Secretary of State Mike Pompeo, Defense Secretary Mark Esper and the Joint Chiefs stood behind him.”I’m pleased to inform you the American people should be extremely grateful and happy,” he said, noting that there were no casualties.Only minimal damage was sustained, he said, adding “an early warning system that worked very well.”

President Trump: "Iran appears to be standing down, which is a good thing for all parties concerned and a very good thing for the world." https://t.co/ldmNa7FdiK pic.twitter.com/ux1Wli6ZDH

Saying Iran will not be allowed to get a nuclear weapon, Trump struck a conciliatory tone about new negotiations over a nuclear deal, saying, “we must all work together toward making a deal with Iran that makes the world a safer and more peaceful place.”He ended by saying the United States was ready to pursue peace with “all who seek it.”The president spoke after Iran’s supreme leader said his country’s missile strikes had “slapped” the U.S.

Here is how the day after the strikes is unfolding. Please refresh for updates.

11:28 a.m.Trump announced that the U.S. would be imposing “powerful” economic sanctions against Iran, but refrained from any immediate threats of military action against the Iranian regime even though he had said he would strike back if Iran attacked the U.S.”As we continue to evaluate options in response to Iranian aggression, the United States will immediately impose additional punishing economic sanctions on the Iranian regime,” Trump said. “These powerful sanctions will remain until Iran changes its behavior.”He added, “Our great American forces are prepared for anything. Iran appears to be standing down, which is a good thing for all parties concerned and a very good thing for the world.”

President Trump: "Our missiles are big, powerful, accurate, lethal and fast … The fact that we have this great military and equipment, however, does not mean we have to use it. We do not want to use it.” https://t.co/ldmNa7FdiK pic.twitter.com/6xvT1Po61D

10:51 a.m. House Republican Leader says clear president had to take actionABC News’ Allison Pecorin reports that House Republican leaders fully support President Trump’s decision to kill the Iranian general and back the president’s foreign policy judgment.”Under this administration the strength of our foreign policy has made us safer, stronger and more respected around the globe,” Minority Leader Kevin McCarthy says. “It’s very clear the president had to take action.”Minority Whip Steve Scalise adds, “It was the right thing to do when President Trump gave the command to take out Soleimani,” Scalise said. “We are a safer world because a brutal terrorist has been removed from the planet.”

10:29 a.m. GOP chairman says Trump told him he stands ready to de-escalate Senate Armed Services Chairman James Inhofe tells ABC News’ Mariam Khan that he spoke with President Trump Tuesday night about 9 p.m. following Iran’s missile attacks which targeted U.S. forces in Iraq.During the conversation, Inhofe says Trump told him that, based on the fact that there were no U.S. casualties, he stands ready to de-escalate the situation and negotiate with Iran going forward.“This is going to open the door for negotiations,” Inhofe says. “I think he is taking it as an opportunity to not just de-escalate but start negotiations.”Republican Inhofe describes the president’s mood as “very, very positive.”Asked if Trump intends to make this clear in his expected speech this morning, Inhofe says he wouldn’t speak for the president.At the same time, a source tells ABC News’ Elizabeth McLaughlin that several key Republican senators spoke to President Trump last night about the need not to respond militarily as it appears that Iran was deliberately trying to avoid U.S. casualties with their attack.The senators recommended conciliatory language, the source says.

10:26 a.m. McConnell warns of Iran threat, Schumer calls Trump foreign policy ‘impulsive’Senate Majority Leader Mitch McConnell speaks on the Senate floor about the Iranian missile attack on U.S. forces.“We must remain vigilant in the face of serious threats posed by Tehran. Apparently, these strikes did not kill or wound Americans, but they demonstrate the significant progress Iran has made over the last decade in building a large, long-range, and accurate ballistic missile force,” McConnell says.Senate Minority Leader Chuck Schumer speaks after McConnell and also condemns the Iranian attacks.

At the same time, he says, “the American people do not want a war with Iran,” adding Trump did not have the authority to pursue one.10:08 a.m.ABC’s Jordyn Phelps reports from the White House that a senior administration official confirms the president met with members of his national security team Wednesday morning in the Situation Room.

9:31 a.m.The White House released an updated schedule for Vice President Mike Pence Wednesday morning, adding that he will join President Trump in the Grand Foyer of the White House for his 11 a.m. remarks.9:14 a.m.The White House released an updated schedule for the President Wednesday morning, adding that Trump will address the nation at 11 a.m. from the Grand Foyer of the White House, following an attack by Iran overnight on two bases in Iraq where U.S. troops are stationed.Earlier Wednesday, Iran’s Supreme Leader Ayatollah Ali Khamenei said his country “slapped” the United States “on the face last night,” referring to the missile strikes against U.S. military forces in Iraq in retaliation for the killing of Iran’s most powerful commander.”But military action is not enough,” Khamenei said in a national televised address in Tehran on Wednesday, adding that the “corrupt presence of the U.S. in the region should come to an end.” His speech was followed by chants from the crowd, saying, “death to America.”Iran fired more than a dozen ballistic missiles into neighboring Iraq around 2 a.m. local time on Wednesday, targeting Iraqi military bases housing American troops and coalition forces, according to Pentagon spokesman Jonathan Hoffman.”These bases have been on high alert due to indications that the Iranian regime planned to attack our forces and interests in the region,” Hoffman said in a statement, noting that “we are working on initial battle damage assessments.””As we evaluate the situation and our response,” he added, “we will take all necessary measures to protect and defend U.S. personnel, partners and allies in the region.”Iraqi Prime Minister Adil Abdul Mahdi said in a statement that his office received “an official verbal message” from Iran shortly before midnight on Wednesday that the missile strikes would begin soon and would be limited to the whereabouts of U.S. forces, without specifying locations.A U.S. defense official told ABC News that 10 of the missiles struck the Ain al-Asad air base in western Iraq’s Anbar province and one hit a base in Erbil in Iraq’s semiautonomous Kurdish region. Four other missiles “failed in flight,” the official said.A source within the Kurdistan Regional Government told ABC News that three missiles were fired at Erbil International Airport and the nearby U.S.military base. Two of the rockets were shot down by anti-missile batteries while the third fell behind the airport but didn’t explode, the source said.The Islamic Revolutionary Guard Corps, a branch of the Iranian Armed Forces, swiftly claimed responsibility for the strikes as throngs of people took to the streets of Tehran to celebrate.”We warn the Great Satan, the arrogant American regime, that any new invasions and aggression will result in more painful and pounding responses,” the Islamic Revolutionary Guard Corps said in a statement.Later, Iranian Foreign Minister Mohammad Javad Zarif wrote on Twitter that his country took “proportionate measures in self-defense Article 51 of” the Charter of the United Nations.”We do not seek escalation or war, but will defend ourselves against any aggression,” Zarif said.Meanwhile, Iranian Minister of Information and Communications Technology Mohammad-Javad Azari Jahromi tweeted, “Get the hell out of our region!”A U.S. official and a senior Trump administration official told ABC News that early indications are there were no American casualties from the strikes. According to U.S. sources, the troops were in bunkers at the time of the attacks.U.S. President Donald Trump took to Twitter late Tuesday night to assure Americans that “all is well.””So far, so good!” he tweeted. “We have the most powerful and well equipped military anywhere in the world, by far!”Iraq’s prime minister also said they haven’t received any reports of Iraqi casualties so far. In a statement posted to social media Wednesday, Abdul Mahdi urged both sides to “not engage in open warfare” and “to exercise restraint.”Amid the escalating tensions, a growing number of international air carriers have decided to suspend or reroute flights to avoid the airspace over Iran and Iraq.The attacks occurred just hours after Iran’s foreign minister told ABC News that the United States “will pay” for the death of Maj. Gen. Qassem Soleimani, longtime leader of the elite Quds Force in Iran’s Islamic Revolutionary Guard Corps.Officials with the U.S. Department of Defense have confirmed that Trump ordered the airstrike that killed Soleimani near Baghdad International Airport on Jan. 2.Over the past 20 years, Soleimani had led the Quds Force in operations throughout the region, backing Syrian President Bashar al-Assad and supporting Shiite militia groups in Iraq, including against U.S. troops during the Iraq War. The U.S. Department of State said Soleimani’s forces are responsible for the deaths of hundreds of American troops because of the kind of explosive devices they helped bring to Iraq. The United States designated Soleimani a terrorist in 2011 under then-President Barack Obama.The Trump administration has argued that Soleimani’s death was critical to foiling “imminent attacks” that the Iranian commander was helping to plot against U.S. personnel in the region. The administration has provided no evidence of those plans.On the weekend after the U.S. airstrike, the Iranian government announced it will no longer abide by any of the operational restraints on its nuclear program under the deal, from which the Trump administration withdrew the United States in May 2018.Hundreds of thousands of people have taken to the streets of Tehran and other cities across Iran in recent days to mourn Soleimani and show support for the Iranian government. The massive crowds have voiced anger at the U.S. airstrike and have hailed the slain general as a national hero.Copyright © 2020, ABC Audio. All rights reserved.