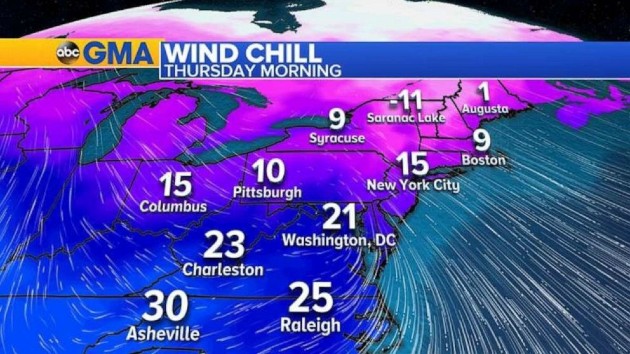 (NEW YORK) — A quick but heavy burst of snow moved through the Mid-Atlantic Tuesday and Tuesday night, producing up to 7 inches of snow in central Pennsylvania and 4 to 6 inches of snow in West Virginia and southwest of Washington, D.C. Officially, Reagan National Airport got only a trace of snow. The quick-moving storm that brought this burst of snow is now moving out of the Northeast, with snow showers Wednesday morning in New England. Behind this storm system it will get windy and very chilly later Wednesday afternoon and into Thursday morning.Now, our attention turns to the West, where storms continue to pound the coast with heavy rain and snow in the mountains. Up to 2 feet of snow fell in parts of the Northern Rockies, where an avalanche warning has been issued for Idaho and Western Montana.Yet another storm is expected to move into the Northwest and Northern Rocky Mountains Wednesday, with more heavy snow in the mountains and rain along the coast and lower elevations. A winter storm warning has been issued for the area. By Thursday, some of the western storms will begin to make their way south and east with rain expected from Southern California to the Great Lakes. But this is just the beginning, as a much strong storm is expected to develop Friday and Saturday in the heartland.By Friday, this western storm will move into the southern Plains and strengthen to produce a severe weather outbreak from the south, with tornadoes, damaging winds and large hail. Dallas, Houston and Little Rock, Arkansas could be in the crosshairs of this severe weather. Further north and east, heavy rain could lead to flash flooding for the Tennessee and Ohio valleys. Further north and west, snow will fly from Colorado to Iowa.On Saturday, the storm will strengthen even more and move east with damaging winds and a tornado threat spreading into major cities such as New Orleans, Birmingham, Alabama and Nashville, Tennessee. On the backside, heavy snow is expected from Missouri to Michigan, and Chicago could also be in the crosshairs. The storm could bring major delays to the Central U.S. at the end of the week into the weekend. Copyright © 2020, ABC Audio. All rights reserved.