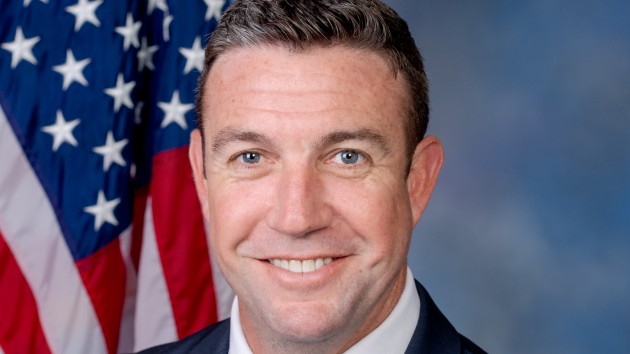 (WASHINGTON) — Rep. Duncan Hunter, R-Calif., submitted his resignation to House Speaker Nancy Pelosi on Tuesday after pleading guilty last month to conspiring to misuse campaign funds. “I write to inform you of my resignation, effective close of business on January 13, 2020, as United States Representative for the 50th District of California,” Hunter wrote. “It has been an honor to serve the people of California’s 50th District, and I greatly appreciate the trust they have put in my over these last 11 years.”Hunter pleaded guilty in early December to one count of conspiracy in a case surrounding his alleged misuse of $250,000 in campaign donations for personal expenses, including family vacations and oral surgeries. He announced after his plea that he would resign “shortly after the holidays.” California Gov. Gavin Newsom has two weeks from Hunter’s last day in Congress to set a date for a special election to fill the seat, but in accordance with a state statute, it’s not likely Hunter’s resignation letter was submitted early enough for the special election to fall on California’s primary voting day.Hunter, 42, succeeded his father in representing a district that includes parts of San Diego and Riverside County, in 2008. The younger Hunter narrowly won reelection in 2018 after being indicted, along with his wife, Margaret, on dozens of charges of improperly using campaign funds. Hunter won with nearly 52% of the vote, narrowly defeating Democratic newcomer Ammar Campa-Najjar by 3 points.Hunter is due to be sentenced in March, while his wife, who pleaded guilty on a single corruption count, is slated to be sentenced in AprilThe House seat has been held by either Hunter or his father since 1980. The district, one of the last Republican areas in southern California, now could be more vulnerable to a Democratic takeover. Hunter was the second House member to endorse then-candidate Donald Trump in 2016. He now joins another early Trump supporter, former Rep. Chris Collins of New York, in pleading guilty to criminal charges, after claiming his prosecution was politically motivated. “I did make mistakes,” Hunter told local station KUSI-TV in December. “I justify that plea with the understanding that I am responsible for my campaign and what happens to my campaign money. Whatever my time in custody is, I will take that hit. My only hope is the judge does not sentence my wife to jail. I think my kids need a mom in the home.”Copyright © 2020, ABC Audio. All rights reserved.