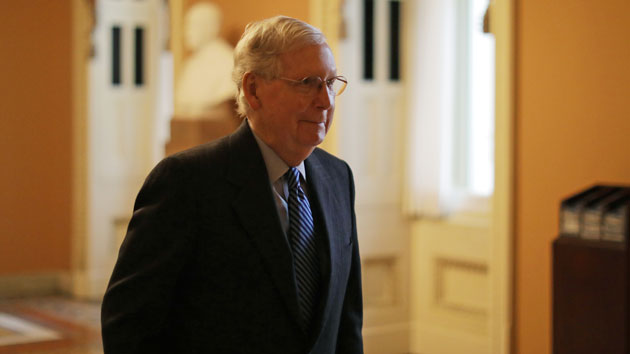 (WASHINGTON) — Senate Majority Leader Mitch McConnell announced Tuesday that a Senate impeachment trial of President Donald Trump would begin without deciding the question of witnesses as Democrats had demanded.”We have the votes,” McConnell said, for the Senate to follow the precedent of the Clinton impeachment trial in which the question of whether to call witnesses was voted on after arguments from the prosecution and the defense.”What’s good for President Clinton is good for President Trump,” he said. “We’ll get around to a discussion of witnesses.””51 senators determine what we do,” McConnell said, after leaving the weekly luncheon where Republicans discuss strategy and count votes. Republicans have a 53-47 majority.Key moderate Republican senators, including Utah Republican Mitt Romney and Maine’s Susan Collins, had said while they would be interested or open to hearing from witnesses, including former National Security Adviser John Bolton, they agreed with McConnell that a decision could wait until the middle of a trial.Senate Minority Leader Chuck Schumer has insisted that it made no sense to have senators hear arguments before all the witness and documentary evidence had been presented.Speaking after McConnell, Schumer said Democrats will force each senator to go on the record on the question of witnesses.”There will be votes on the four witnesses we have asked for,” Schumer said. “We Democrats have the ability to get votes an impeachment trial.””The eyes of America — the eyes of the Founding Fathers looking down upon us — are on our Republican colleagues,” Schumer continued, referring to the four Republicans senators Democrats were hoping would support their position and help them form a voting majority.If they vote against witnesses and documentary evidence, Schumer said, “they will be engaging in a cover-up. The next few weeks will be very, very telling,” he said.”We will not let them avoid the vote. They can delay it — they can’t avoid it,” he said of the Republican strategy to put off the witness question.Schumer said there was a “pretty decent chance” that he could still persuade some Republicans to vote with Democrats.”She’s accomplished a great deal already,” Schumer said of House Speaker Nancy Pelosi and her decision to withhold the articles of impeachment while Democrats demanded what they called a “fair trial” with witnesses and documents. Copyright © 2020, ABC Audio. All rights reserved.