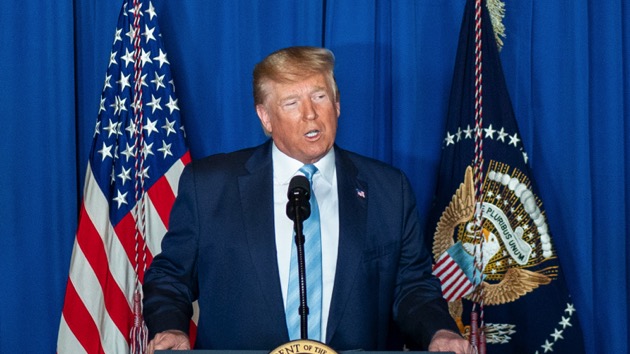 (WASHINGTON) — On his first morning back in Washington following a 16-day holiday at his Florida resort, President Donald Trump called for a speedy end to the impeachment saga in a series of tweets Monday morning.“Get this done,” the president wrote on Twitter.

The Impeachment Hoax, just a continuation of the Witch Hunt which started even before I won the Election, must end quickly. Read the Transcripts, see the Ukrainian President’s strong statement, NO PRESSURE – get this done. It is a con game by the Dems to help with the Election!

The House passed two articles of impeachment against President Trump last month, but House Speaker Nancy Pelosi has yet to formally transmit the charges to Senate, a step that is necessary before the upper chamber can commence with a trial. Pelosi has withheld the articles as a bargaining chip to assist Democratic Leader Chuck Schumer in negotiations over the rules of the pending trial Senate Majority Leader Mitch McConnell.The president goes on to complain that impeachment is distracting from other important matters, writing that “Congress & the President should not be wasting their time and energy on a continuation of the totally partisan Impeachment Hoax when we have so many important matters pending.”Though the president does not directly mention Iran, his tweets come amid heightened tensions in the Middle East after the president ordered the targeted killing of high-ranking Iranian commander Qassem Soleimani in an airstrike Thursday.

Congress & the President should not be wasting their time and energy on a continuation of the totally partisan Impeachment Hoax when we have so many important matters pending. 196 to ZERO was the Republican House vote, & we got 3 Dems. This was not what the Founders had in mind!

As Congress returns to Washington to this week with attention now divided between the looming impeachment and concerns about the potential for an escalating tit-for-tat with Iran, some Democrats are openly questioning whether the president ordered Suleimani’s killing to serve as a distraction from impeachment.”So what happens right now? Next week, the president of the United States could be facing an impeachment trial in the Senate. We know that he is deeply upset about that. I think that people are reasonably asking, why this moment? Why does he pick now to take this highly inflammatory, highly dangerous action that moves us closer to war?” Democratic presidential candidate and Massachusetts Sen. Elizabeth Warren said on CNN on Sunday.The president tweeted out a separate message on Iran Monday, writing in an all-caps tweet that “IRAN WILL NEVER HAVE A NUCLEAR WEAPON!” The tweet comes after Iran over the weekend said it would no longer abiding by the terms of the 2015 nuclear agreement. Copyright © 2020, ABC Audio. All rights reserved.