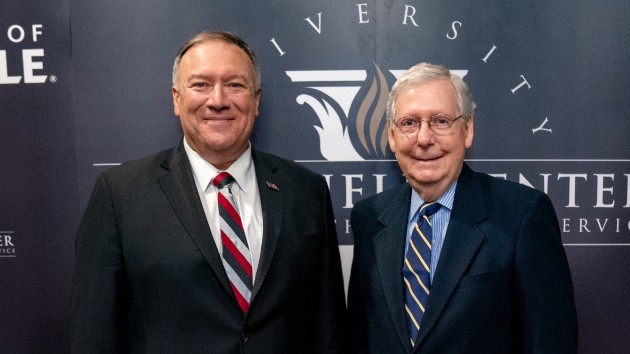 (WASHINGTON) — Secretary of State Mike Pompeo told Republican Senate Majority Leader Mitch McConnell that he will not run for an open Kansas Senate seat, according to a source familiar with their meeting on Monday. McConnell had spent months trying to recruit the top U.S. diplomat and former congressman to run in his adopted home seat amid concerns that Republicans could be in danger of losing the race.Pompeo has batted away speculation, while consistently appearing to leave the door open. Several trips to the state in 2019 fueled the fire that he was interested in returning to Congress and forge his own political future. A source close to McConnell told ABC News that the senator believes Pompeo is “doing an incredible job as secretary of state and is exactly where the country needs him to be right now.”But Republicans are growing concerned that a Democrat could win the seat, even though deep-red Kansas hasn’t sent a Democrat to the Senate since 1932. In November, President Donald Trump even said publicly that he endorsed a plan to have Pompeo run if Republicans looked to be in danger of losing the seat. That fear is in large part because the leading Republican candidate is the former Kansas Secretary of State Kris Kobach. An immigration hardliner with a history of controversial statements and false claims, Kobach lost the race for Kansas governor in 2018 and is reportedly polling behind the leading Democrat candidate.In contrast, Pompeo is strongly popular in Kansas, where he served three terms as a congressman before he joined the Trump administration in January 2017 as CIA director. His political support includes the power broker Charles Koch, who along with his now deceased brother David, helped to fund Pompeo’s congressional campaigns. But Pompeo has also made no secret of his presidential ambitions and may have seen the junior Senate seat as a step down from his executive branch roles, especially if he intends to run for the White House in 2024.The filing deadline for the race is June 1, still giving Pompeo time to jump into the race.Copyright © 2020, ABC Audio. All rights reserved.