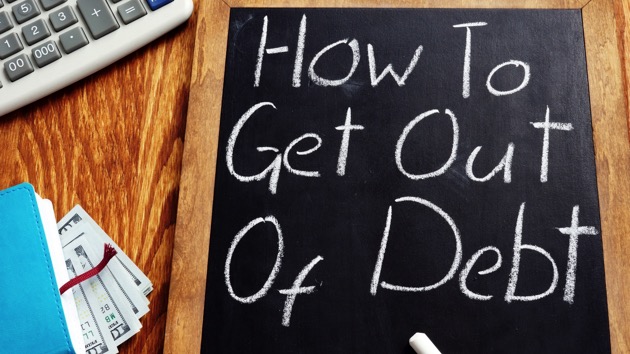 (NEW YORK) — Lauren Mochizuki, a mom of two, had a wake-up call several years ago when her husband, Kyle, told her he wanted to pay off the family’s more than $260,000 debt.”My husband was talking to some friends and he came home one day and he said, ‘I think we should, one, go on a budget and, two, become debt free,"” Mochizuki, 34, told Good Morning America. “Once I saw [our debt], I was shocked and I felt a little overwhelmed.”Mochizuki, an emergency room nurse, and her husband were unware that their debt had climbed to just over $266,000.”We both had great jobs but we were just spending and we didn’t know where our money was going,” she said. “We were just living life without regard to our finances or our future selves.”Inspired by the idea of having more control over their lives, the Mochizukis started to pay off their debt.They focused first on creating a budget that was effective but realistic, and held monthly budget meetings as a couple, which they still hold to this day.”When you do create a budget, you should make it realistic, not idealistic,” said Mochizuki. “You have to account for all the things that you do in life. Don’t just cut your grocery budget from $1,000 to $200. That’s not going to work. That’s not realistic.”They also started by paying off their smallest debts, which Mochizuki said gave them momentum and “the grit and the strength to keep it going.”Mochizuki, who shares financial tips on her blog, and her husband also looked for ways to make extra money, including picking up extra shifts at their jobs — Kyle is a firefighter — and holding garage sales to sell clothes and items from their home.They also developed new shopping habits.”We gave each other spending money every month but if I wanted to buy an expensive coat that I really wanted, for example, I had to budget for it and save for many months,” said Mochizuki.Just over two years after starting their debt journey, the Mochizukis paid off their $266,000 debt.Just a few months after becoming debt-free, Mochizuki and her husband welcomed their first child. More recently, they were able to buy their dream home.”I think of our debt-free journey as more of a marathon than a sprint,” said Mochizuki, who said it took her and her husband exactly 33 months to pay off their debt. “Since becoming debt free I feel like a completely different person.”The accountability that Mochizuki and her husband provided each other is a key factor to have when paying off debt, according to Rebecca Jarvis, ABC News chief business, technology and economy correspondent.”Have that partner, whether it’s a spouse or a friend, that goes along with you on this journey to remind you — because it’s tough along the way — to keep at it, to keep chipping away,” Jarvis said Monday on GMA.Here are three more tips from Jarvis to keep in mind on your own debt journey.1. Stop using credit cards. “These are your highest interest rate debts, meaning they are the thing that grows the fastest and make you owe more the fastest.”2. Create an emergency fund. “This should be enough to cover three to six months of expenses.”3. Use any additional money at your disposal to pay down debt. “It never hurts to pay off more debt. The problem is when you don’t pay it off fast enough, then it just accumulates over time.” Copyright © 2020, ABC Audio. All rights reserved.