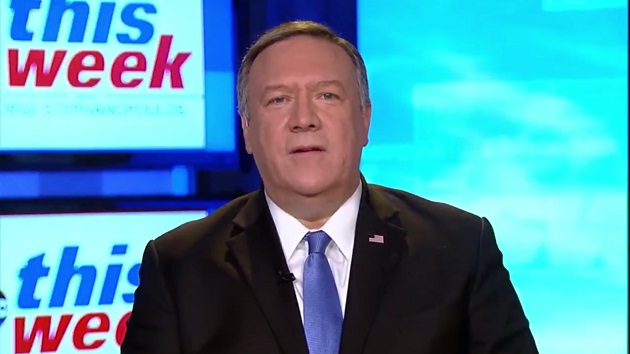 (WASHINGTON) — Secretary of State Mike Pompeo said Sunday on ABC’s “This Week,” that the world is a safer place as a result of Iranian commander Qassem Soleimani’s death.”This was a bad guy, we took him off the playing field. And that’s important because this was a fella who was the glue, who was conducting active plotting against the United States of America, putting American lives at risk,” Pompeo told ABC News Chief Anchor George Stephanopoulos.”President Donald Trump made the right decision to stop Qassem Soleimani from the terror campaign that he’d been engaged in against America,” he added, citing an attack at an American base last week and attacks five and 10 years ago.In response to a New York Times report about officials who questioned the rationale behind the strike, the secretary of state said there was no skepticism among senior leaders with access to all of the intelligence.”I think (Joint Chiefs Chairman) General (Mark) Milley used the term, we would have been culpably negligent had we not taken this strike. The intelligence assessment made clear that no action allowing Soleimani to continue his plotting and his planning — his terror campaign — created more risk than taking the action that we took last week. We reduced risks,” Pompeo said.He also responded to former Vice President Joe Biden who said on the campaign trail Saturday that Trump had “no authority” to take the country into a military conflict with Iran without further congressional authorization.”We’re having to clean up their mess,” Pompeo said of the Obama administration, adding “we’ll do everything required under the law to bring us into compliance with all the relevant Constitutional legal provisions with respect to our duties with the legislative branch.”When Stephanopoulos asked if that meant they would seek congressional authorization for future actions against Iran, Pompeo said, “we have all the authority we need to do what we’ve done to date” and that they would continue to do things “appropriately, lawfully and constitutionally.”The region has been on edge since Trump ordered a drone strike on Thursday to kill Soleimani, a top Iranian general who commanded the elite Quds Force.Iranian officials, including Ayatollah Ali Khamenei himself, have vowed “vengeance” for Soleimani’s death, leaving U.S. officials on high alert and prompting the Trump administration to deploy roughly 3,500 more troops to the region.”Iran is talking very boldly about targeting certain USA assets as revenge for our ridding the world of their terrorist leader,” Trump tweeted Saturday evening — warning the U.S. had 52 Iranian sites, “some at a very high level & important to Iran & the Iranian culture” that it would “HIT VERY FAST AND VERY HARD” if Iran retaliated.It’s unclear what those sites are or whether an actual Pentagon list of targets includes cultural sites. Attacks on cultural targets could constitute a war crime, according to international law.Pressed by Stephanopoulos on “This Week” Sunday on why the president was threatening cultural sties, Pompeo said, “We’ll behave lawfully. We’ll behave inside the system.””The American people should know that every target that we strike will be a lawful target, and it will be a target designed with a singular mission, of protecting and defending America,” he added.Pompeo said the president’s comments were indicative of the Trump administration’s different approach to foreign policy when it comes to Iran.”We’ve told the Iranian regime, enough. You can’t get away with using proxy forces and think your homeland will be safe and secure,” he said.”We’re going to respond against the actual decision-makers, the people who are causing this threat from the Islamic Republic of Iran,” Pompeo added.Sporadic missile attacks erupted across Iraq on Saturday, at times seeming to target facilities where U.S. troops are stationed. A rocket attack at Al Balad Air Base, an Iraqi facility north of Baghdad, injured three Iraqi security forces, but no American personnel, according to a U.S. official. Two rockets also fell within the Green Zone, the secure section of Baghdad that houses central government buildings and foreign embassies, but the U.S. embassy was not affected.The embassy was assaulted earlier this week by a pro-Iran Shiite militia and its supporters after the U.S. killed 25 of its fighters in airstrikes that were retaliation for the death of an American civilian contractor last Friday — an attack the U.S. blamed on the militia and its backer, Iran.Pompeo has made a series of calls since Friday morning to U.S. allies in the region and other world powers to defend the strike, which even some allies, including France, have criticized for escalating tensions with Iran. The U.S. is “committed to de-escalation,” his spokesperson said in statements Friday.Thousands of demonstrators took to the streets on Saturday in Baghdad and Tehran to mourn Soleimani and protest the U.S. — chanting “No, No, America” and “Death to America, death to Israel.”As the world awaits how Iran will fulfill its pledge of “vengeance,” there is heightened concern that U.S. embassies, diplomats and military personnel could be targeted by Iranian forces or one of their many Shiite proxy groups, including Hezbollah in Lebanon and Syria.U.S. embassies in more than a dozen countries, from Mali in West Africa to India and Pakistan in South Asia and throughout the Middle East, have issued alerts since Soleimani’s killing, warning U.S. citizens to be vigilant and in some cases restricting the movement of U.S. personnel.But still, the Trump administration has argued the strike makes Americans more safe, thwarting “imminent attacks” that Soleimani was helping to plot against U.S. personnel in Iraq, Syria, Lebanon and in the region.The administration has provided no evidence of those imminent attacks.A senior State Department official said Friday Soleimani’s death at least “slows” down those attacks, but said they could not guarantee it had stopped them.