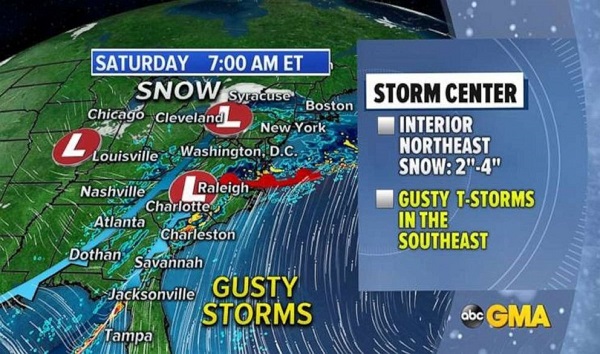 (HUNTSVILLE, Ala.) — A pair of cold fronts moving across the eastern U.S. brought another round of heavy rain and some flash flooding on Friday. Over 3 inches of rain was reported outside of Huntsville, Alabama. This comes after parts of the Jackson, Mississippi, area saw daily rainfall records on Thursday with over 4 inches of rain in spots.Meanwhile the colder air behind these fronts is supporting a couple areas of light snow. Locally 6 to 8 inches of snow is being reported in northern Iowa this morning due to a fast moving but intense burst of snow in the colder air.Some more rain is expected along the East Coast today. A couple of gusty thunderstorms will also be possible in the Southeast — especially in parts of northern Florida, where very mild air will help fuel the storms. Jacksonville, Florida, reached a high of 85 degrees, a new record for the day, and 19 degrees above average.Meanwhile, as some of this moisture interacts with the colder air in the north, some snow is expected to move across the interior Northeast today, near the Canadian border. Snow will also sneak in behind the fronts and likely be enhanced along the Appalachians as well. The result of this is locally 2 to 4 inches in the far interior Northeast along the Canadian border, as well as along parts of the Appalachians into parts of West Virginia.On Sunday, as these fronts clear the East Coast, lingering snow squalls will be possible in the Northeast, as well as gusty winds locally over 30 mph. It should remain too warm along the coastline for any snow that does fall to accumulate.Then by early Monday a quick-moving clipper system will bring another round of snow showers to parts of the Northeast. A burst of light snow is possible with an additional 1 to 2 inches of snow from the Great Lakes to the Canadian border in the Northeast. There could be a very light accumulation in the lower Hudson Valley from this.On Tuesday another quick-moving system will develop in the Ohio River Valley and bring a burst of light snow from Indiana to the Northeast. Even though this storm will try to organize and expand its snow shield, it’s likely all snow accumulations for the Northeast will remain on the low end, with mostly rain or brief mixing in the Northeast cities. There is no indication at this time that this storm becomes a significant event.The next pronounced weather story is actually the unusually quiet sensible weather across much of the U.S. next week. Outside of rounds of storms in the Northwest U.S., there is no significant or widespread winter storm threat, which is somewhat unusual for this time of the year. Typically, January can be quite turbulent with round after round of storm threats moving across the country.Perhaps an even more significant story is the likelihood of well above average temperatures for the Eastern U.S. as we head into the middle of the month. This is also quite notable, as mid to late January is climatologically the coldest time of the year. Typically, there are brutal cold blasts tracking eastward across the country. However, as we head into late next week and beyond, it is look quite mild. At this time, widespread 50s are likely for the Northeast for several days in the middle of the month, which would be approximately 20 degrees above average.It’s important to note that although this looks like a prolonged mild trend, weather can change quite abruptly and dramatically. Simply said, there is still 7 weeks of meteorological winter to go. Copyright © 2020, ABC Audio. All rights reserved.

US sends Bradley Fighting Vehicles to Syria to boost security for troops following Russian encounter
Wisconsin breaks own record for new COVID cases
Black man beaten by Georgia deputy speaks out after release from jail: ‘I feared for my life’
Trump’s leadership is ‘opposite of racism’: Kim Klacik on ‘The View’
Challenges aside, Emmy producers Reginald Hudlin and Ian Stewart say the show will be “great”
1-year-old hears mother’s voice for first time