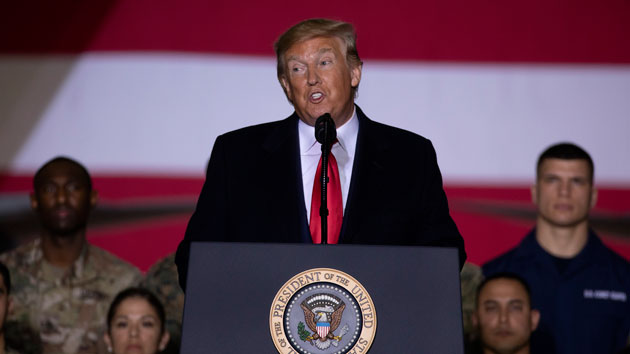 (MIAMI) — President Donald Trump delivered a typical bombastic and at times vicious stump speech Friday night at a Miami megachurch for his first campaign event of 2020.Trump touted an airstrike he ordered in Baghdad that killed the leader of Iran’s elite Quds Force, Qassem Soleimani.The president kicked off his speech by launching his campaign’s latest coalition, “Evangelicals for Trump,” and by commenting further on the killing of the top Iranian general, telling supporters at the bilingual megachurch Ministerio Internacional El Rey Jesús that “Qassem Soleimani has been killed and his bloody rampage is now forever gone.””I don’t know if you know what was happening,” Trump added, “but he was planning a very major attack and we got him.”Trump also reiterated that despite recent military action, “We do not seek war. We do not seek nation-building. We do not seek regime change.”The president, while addressing thousands of supporters at the church as if at a typical campaign rally, also blasted a few 2020 Democratic candidates and railed against the press.In terms of his pitch to evangelicals gathered at the bilingual megachurch, Trump highlighted his record on appointing judges, his stance on abortion and bashed Democrats for alleged attacks on religious liberty, at times misleadingly characterizing candidates’ relationship with their faith.”While certain fads come and go, it’s an eternal truth that faith and family lead to the stability, happiness and prosperity of nations,” Trump said. “Yet as we speak, every Democrat candidate running for president is trying to punish religious believers and silence our churches and our pastors.”Trump followed that with an attack on South Bend, Indiana, Mayor Pete Buttigieg, questioning his faith, which the mayor has made an aspect of his campaign.”Mayor Pete, I hope he does great. And all of a sudden he’s become extremely religious, as happened about two weeks ago,” the president said.Before heading to Miami, the president issued a defense of his order to kill the top Iranian general, accusing him of “plotting imminent and sinister attacks” on American diplomats and military personnel.For the majority of Trump’s speech Friday night he looked to switch gears to energize and build up evangelical support at the event. The launch of “Evangelicals for Trump” also comes weeks after the president clashed with evangelical publication Christianity Today over an op-ed that called for his removal from office.Mark Galli, the publication’s editor-in-chief and author of the editorial, wrote in December that the findings of the impeachment inquiry are “not only a violation of the Constitution; more importantly, it is profoundly immoral.”Galli added: “That he should be removed, we believe, is not a matter of partisan loyalties but loyalty to the Creator of the Ten Commandments.”The president fired back by calling “Christianity Today” a “far-left magazine” that is “doing poorly.”The campaign maintains the “Evangelicals for Trump” event had been planned long before the editorial was published.Trump’s reelection team hopes the new coalition will help sway evangelicals who may be on the fence by focusing on his record of conservative judicial appointments, including two Supreme Court justices, and his pro-life record.”The president draws tremendous support from all corners of the religious community, and it’s important to engage with them,” Trump campaign director of coalitions Hannah Castillo told ABC News.In the coming months, the campaign is planning an even larger investment in boosting religious support for the president by launching several other coalitions, including “Catholics for Trump” and “Jewish Voices for Trump.”Christians and Catholics, especially among white voters, supported the president in significant numbers in 2016, and the campaign hopes these new coalitions help repeat those results. About 8 in 10 self-identified white evangelical Christians said they voted for Trump in 2016, according to Pew Research Center.But while white Catholics supported Trump over Democratic nominee Hillary Clinton by a 23-point margin, Hispanic Catholics backed Clinton 67% to 26%, according to Pew.Copyright © 2020, ABC Audio. All rights reserved.