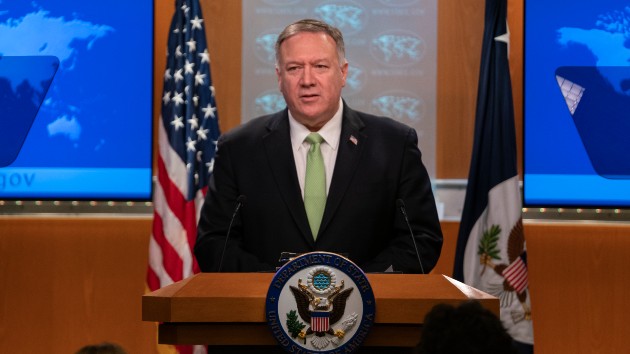 (WASHINGTON) — In his first comments on his decision to authorize the killing of Iran’s top general, President Donald Trump blamed Qassem Soleimani for the killing or wounding of thousands of Americans, tweeting Friday morning he “was plotting to kill many more … but got caught!” Shortly before, Secretary of State Mike Pompeo gave extensive interviews to Fox and Friends and CNN, also claiming Soleimani’s death disrupted an “imminent attack” on American targets in the Middle East.But there are heightened fears now of an even greater threat to Americans and American interests after Iran vowed to retaliate for the death of the Quds Force commander, hailed as a hero and now a martyr in Tehran. Critics, including members of Congress, argued that Trump’s decision had endangered more lives.The assassination of perhaps the second most important official in Iran’s government, behind Ayatollah Khamenei, marked a major escalation in months of tension between the U.S. and Iran. Pompeo and several Republican lawmakers said the strike came after months of warnings to Tehran, which were ignored as Iran’s proxies came increasingly close to killing U.S. soldiers in Iraq — succeeding last Friday with a rocket attack that killed a U.S. civilian contractor and wounded several U.S. and Iraqi soldiers. But killing Iran’s senior commander will have dramatic repercussions, especially on the ground in Iraq, whose prime minister denounced it as a violation of their sovereignty. A push by pro-Iranian politicians in Baghdad to expel U.S. forces could gain even more steam, as Prime Minister Adil Abdul-Mahdi called for an emergency session of parliament “to take the appropriate legislative measures in a manner that preserves the dignity, security and sovereignty of Iraq.”The U.S. embassy in Baghdad warned American citizens Friday to “depart Iraq immediately … via airline while possible, and failing that, to other countries via land.” Pompeo declined to offer many specifics, but called it an “imminent attack that [Soleimani] was working actively … using proxy forces in the region” and “that would have put hundreds of lives at risk.” He said that Soleimani himself, who had just arrived in Baghdad when his motorcade was bombed by the U.S. late Thursday night, described it as “a big action” — an indication of how strong U.S. intelligence around him was.”The president’s decision to remove Soleimani from the battlefield saved American lives,” Pompeo told CNN Friday. The Pentagon confirmed late Thursday that Trump had ordered the airstrike, but made no mention of an “imminent attack.” Soleimani “was actively developing plans to attack American diplomats and service members in Iraq and throughout the region,” the Defense Department said in a statement.GOP Sen. Lindsey Graham said he was briefed on plans to conduct the strike earlier this week while visiting Trump in Florida earlier this week, Graham told Fox News Friday. The two men were spotted playing golf together on Monday at the president’s Florida resort Mar-a-Lago. A source told ABC News that preparations for a strike on Soleimani began last week after the U.S. contractor was killed at an Iraqi base near Kirkuk, Iraq, last Friday. The Trump administration blamed that attack on Kata’ib Hezbollah (KH), a Shiite militia group with direct ties to Iran’s Quds Force and the Islamic Revolutionary Guard Corps. In response, the U.S. bombed five KH sites in Iraq and Syria Sunday, killing at least 25 fighters from the group and igniting a wave of anti-American opposition that culminated in an assault on the U.S. embassy in Baghdad on New Year’s Eve.Pressed for details on the intelligence, Pompeo said the administration would consider releasing some information to show the attack was imminent: “We want the world to understand that there was an imminent attack taking place,” he said. “This was an intelligence-based assessment that drove our decision-making process,” he added. Several U.S. embassies in the region issued alerts to U.S. citizens, warning of unrest or demonstrations. Pompeo wouldn’t say whether the U.S. would evacuate the embassy in Baghdad, just two days after KH supporters, including other pro-Iranian Shiite militias and politicians, assaulted the compound.While the U.S. “remains committed to de-escalation,” according to State Department spokesperson Morgan Ortagus, it seems all but certain that Iran will retaliate, either directly, deploying the unconventional attacks of the Quds Force around the world, or through proxy forces, like KH in Iraq or Hezbollah in Lebanon, Syria, or elsewhere. “Iran will feel compelled to respond by both overt and covert action against the US and our interest. This response or responses could happen anywhere,” said Mick Mulroy, Trump’s former top Pentagon official for the Middle East and now an ABC News contributor. “Between the IRGC Quds Force and their intelligence service, they have worldwide reach and will likely not exclude American civilians as targets.” An additional 750 troops deployed to the Middle East Wednesday, while 100 Marines stationed in Kuwait were moved to reinforce security at the embassy in Baghdad. Additional troops have been placed on alert for possible deployment, according to the Pentagon. Copyright © 2020, ABC Audio. All rights reserved.

Secretary of State Mike Pompeo to headline fundraiser for Christian charity in swing-state Florida
Only 10% of US adults may have COVID-19 antibodies: Study
Most say wait on Ginsburg seat, while opposing packing the court: Poll
Black flight attendant and white airline CEO reunite after emotional talk on race
Astronaut Terry Virts on managing isolation in space and during a pandemic
Berkeley set to become first US city to ban junk food in grocery store checkout aisles