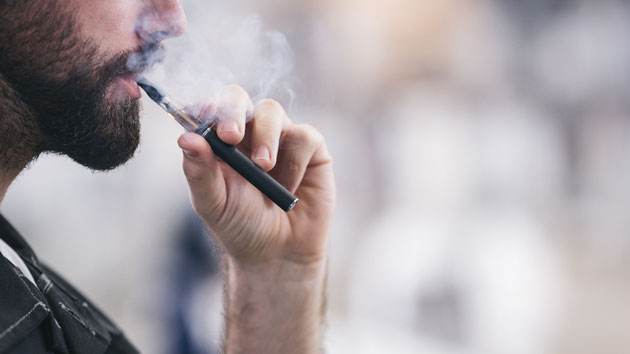 (WASHINGTON) — The Trump administration on Thursday said it will effectively ban all flavors of vaping cartridges except menthol and tobacco flavors, a step back from previous plans to ban all flavors in an attempt to stem rising rates of youth nicotine rates attributed partly to their appeal.President Donald Trump and Health and Human Services Secretary Alex Azar announced in September that the administration would ban all flavored vaping products, saying the country needed “strong rules and regulations” to make them less appealing to teens.But Thursday’s announcement took a significant step back from the full ban proposed last year. The administration will move to remove one-time use flavored pods used in e-cigarettes like Juul that are popular among young people off the market but will still allow vaping liquids used in other models to be sold in adult-only vape shops.In remarks to reporters earlier this week, Trump said the announcement would protect families and children from potential harm related to vaping or nicotine addiction but would also protect the vaping industry. Trump also indicated that the ban could be temporary while the Food and Drug Administration reviews applications to allow vaping and e-cigarette products back on the market.”We think we’re going to get it back onto the market very, very quickly, but we have to protect the children. We have to protect the families. At the same time, we have a very big industry. It’s become a very big industry. We’re going to take care of the industry,” Trump told reporters at Mar-a-Lago on Tuesday night.The Campaign for Tobacco-Free Kids, a prominent anti-tobacco use advocacy group, quickly criticized the announcement saying that leaving menthol flavors on the market will make the policy less effective in stemming the rates of young people using the products.”Rather than clear the market of all flavored e-cigarettes, as the Administration promised to do in September, the new policy allows menthol flavored e-cigarettes and flavored liquids in every imaginable flavor to remain widely available — and kids no doubt will be able to get their hands on them,” the campaign’s president Matt Myers said in a statement.Myers argued that teenagers will shift to using menthol flavors if others aren’t available and that companies could reclassify sweeter mint flavors as menthol to avoid the ban.The largest and most popular company among teenagers, Juul, already pulled flavored products from the market earlier this year.When the Trump administration’s plan was initially announced, Azar said the Food and Drug Administration could remove flavored products from the market because they were already being sold illegally since the agency has not officially approved any vaping products to be sold to the public. Under federal tobacco laws the FDA has the authority to evaluate new tobacco products and determine if they have a public health role as an alternative to cigarettes or should be subject to restrictions in where they can be sold or advertised.Pro-vaping advocates have been lobbying the administration to keep some flavored products on the market, saying adults prefer them and use vaping to quit traditional, more harmful cigarettes.The announcement comes weeks after the president and Congress moved to raise the legal age to purchase tobacco products to 21. Copyright © 2020, ABC Audio. All rights reserved.