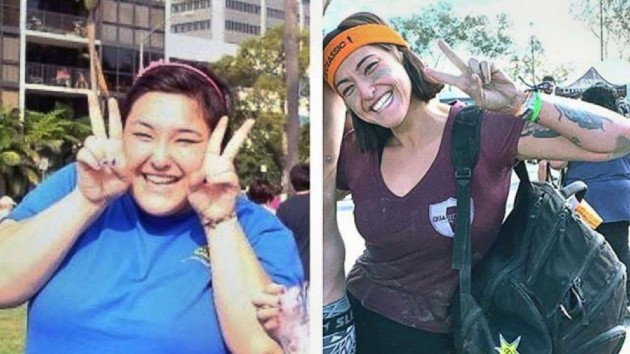 (NEW YORK) — Angela Colabucci describes herself as someone who was overweight her entire life. The 30-year-old decided to make a change two years ago after giving birth to her son.Today, Colabucci has lost nearly 130 pounds and celebrated her weight loss by completing a Tough Mudder obstacle race in November in her home state of California.”If you had told me 10 years ago that I would run a 10-mile obstacle race I would have said, ‘No, there’s no way I could do that,"” Colabucci told ABC News’ Good Morning America. “Now, I just go for it.” Colabucci, an office administrator in the pharmaceutical industry, started her weight loss journey in early 2017 by committing to be active every day. “That was my first goal, just 30 minutes of cardio, either on the Stairmaster or walking because those were easiest on my joints,” she said. “At my heaviest, around 280 pounds, I had to just walk because I couldn’t run even a mile.” Colabucci also began to change her mindset on food. “I didn’t think about what I was eating, just whatever sounded good at the time I would eat,” she said of her “before” diet. “A lot of processed foods, anything that I felt like.”She asked a friend in dietetics school to teach her about portion size and began to pay attention to both what and how much she was eating. She also cut out sugar and refined carbs — going for an all-or-nothing approach to her diet. “I just told myself that I don’t eat that,” she said, referring to sugar and carbs. “That was the first mental change I had to make.”Now, Colabucci focuses on eating a high-protein diet and allows herself quality carbohydrates like black beans and sweet potatoes. On a typical day she said she’ll eat an apple and peanut butter for breakfast, a salad with protein for lunch and a chicken breast and vegetables for dinner. “I feel so much better,” she said. “I get sick less and I just have a completely different relationship with food.”Colabucci found a gym with daycare so she could work out outside the home, and found inspiration after the rush of resolution-makers in January had faded away. “I noticed the gym was now empty and I thought all these people have fallen off and I’m still here,” said Colabucci, who added strength training and running to her exercise regime. “I wanted to prove them wrong. I was still there.” She also found ways to make her new lifestyle work. If she knows she cannot work out after work, Colabucci squeezes in something during her lunch break.When she got tired of meal prepping, Colabucci switched to packing up her leftovers from dinner for lunch the next day. “Time is going to be your best friend and your enemy,” she said. “It’s so easy to say, ‘I don’t have time to do this,’ but there are so many ways to make it work.” “And changes take time to see, so even if you’re seeing changes on the scale, it can be demotivating if you don’t feel like it’s noticed,” added Colabucci, who took photos of herself every month for motivation. “But if you keep going, it’ll happen.” Most importantly for Colabucci, she can now keep up with her son and has made healthy eating habits part of the norm for their family. “I can definitely keep up with my son now and he’s exposed to a lot more healthy foods,” she said. “I feel happy, finally.”Copyright © 2020, ABC Audio. All rights reserved.