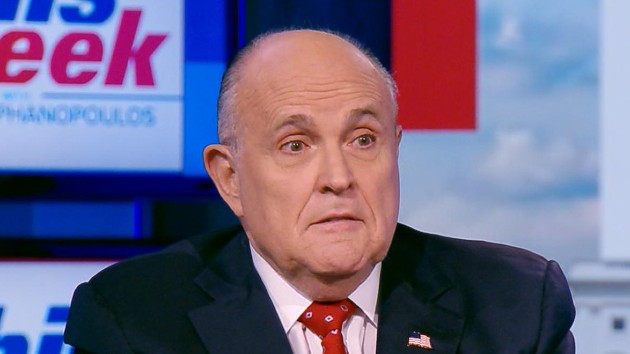 (WASHINGTON) — Rudy Giuliani, President Donald Trump’s private attorney and a key figure in his impeachment, said he is prepared to do more than just testify at the Senate trial when that comes to pass — saying he would turn the tables on Democrats and “try the case” against them. “I would testify, I would do demonstrations. I’d give lectures. I’d give summations. Or, I’d do what I do best, I’d try the case,” Giuliani told ABC News’ Kyra Phillips Tuesday night as he arrived at a New Year’s Eve gala at Trump’s Mar-a-Lago resort. “I’d love to try the case.” The remarks come as the contentious debate about whether there will be witnesses at Trump’s impeachment trial continues among Senate leadership.The former New York City mayor went on to clarify that — if were up to him — he would flip the case he called “an illegal coup” and instead try it as a one of racketeering against the Democrats he alleges participated in corruption in Ukraine. That theory remains unproven.”I don’t know if anybody would have the courage to give me the case, but, if you give me the case, I will prosecute it as a racketeering case, which I kind of invented anyway,” Giuliani added. When Phillips asked Giuliani about his December trip to Ukraine, at the height of the impeachment process, Giuliani declined to speak about the specifics of his findings yet, but alleged “the corruption in Ukraine is vast.””We should call it Ukrainian-American corruption,” he added, without providing specifics.

Trump and his supporters have espoused the theory that Ukraine interfered in the 2016 U.S. election on behalf of Hillary Clinton. Witnesses who testified during the impeachment hearings dismissed this notion and said, in fact, that Russia, which carried out an extensive interference campaign in 2016, would want U.S. leadership to believe this line. After returning from his latest trip to Ukraine, Giuliani claimed to have evidence to exonerate Trump and incriminate his political rivals, including former Vice President Joe Biden, his son, Hunter and other Democrats. Giuliani told reporters Tuesday night he would wait to share his findings until he identifies “the proper forum to do it” — be it an impeachment trial or not. The allegations against the Bidens remain unproven.Sen. Lindsey Graham, R-S.C., who first called on Giuliani to share his findings from his Ukraine trip with the Senate Judiciary Committee in late December, also urged Giuliani to “make sure it’s not Russian propaganda.” Giuliani has been at the center of the impeachment proceedings and would be a key witness for Democrats, many of whom allege the president’s attorney carried out a shadow foreign policy in Ukraine. Giuliani, however, is currently not expected to take an active role in the president’s defense team for the pending Senate trial. Copyright © 2020, ABC Audio. All rights reserved.