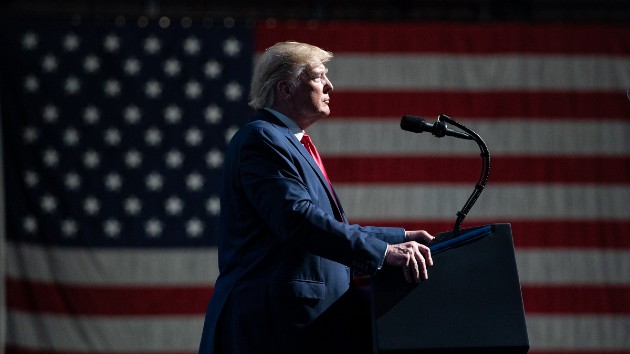 (WASHINGTON) — President Donald Trump continued to show off his campaign’s fundraising prowess, raising a whopping $46 million in the fourth quarter and ending the year with over $102 million cash on hand, according to a press release from his campaign. Campaign manager Brad Parscale partially credited impeachment, which has been a constant news story during the final quarter of the year, for the huge haul.”Democrats and the media have been in a sham impeachment frenzy and the President’s campaign only got bigger and stronger with our best fundraising quarter this cycle,” Parscale said in a statement. “The President’s war chest and grassroots army make his re-election campaign an unstoppable juggernaut.” During the past quarter, the Trump campaign has zeroed in on impeachment in advertisements and fundraising efforts, and Trump himself held multiple rallies where he railed against the House of Representatives’ impeachment pursuit and the Democratic players leading it. These figures don’t include money raised by the Republican National Committee or any authorized joint fundraising committees. Copyright © 2020, ABC Audio. All rights reserved.

US sends Bradley Fighting Vehicles to Syria to boost security for troops following Russian encounter
Wisconsin breaks own record for new COVID cases
Black man beaten by Georgia deputy speaks out after release from jail: ‘I feared for my life’
Biden swings through Minnesota as early voting kicks off new phase of 2020 race
Dax Shepard gives himself an undercut to “match” his daughter
1-year-old hears mother’s voice for first time