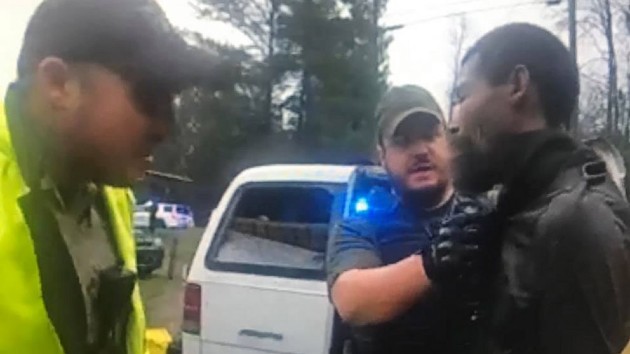 (BROOKSIDE, Ala.) — Dramatic body camera footage released by Alabama authorities captured the moment police officers rescued a kidnapping victim from the back of a van. A citizen notified police of a kidnapping in progress on Sunday, according to the Brookside Police Department. Suspect Sean E. Sanders was driving a white van while holding a female victim at knifepoint. The woman was bleeding from the head and screaming “Help, he’s going to kill me,” Brookside police chief Mike Jones confirmed with ABC News.The witness followed the vehicle while giving police dispatch the vehicle description, direction of travel and tag number, Jones said. Officers later spotted Sanders ramming the witness’ vehicle in a church parking lot. Officers pursued and eventually blocked Sanders. That’s when they saw Sanders forcing the bleeding victim to the floorboard. Officers tried to enter the truck. Sanders resisted, ramming a police unit and fleeing, according to Jones. Officers eventually barricaded Sanders after another pursuit. Sanders also attempted to run over a Brookside officer, said Jones. The officer shot into Sander’s vehicle “disabling the vehicle” as it drove into the front yard of a nearby residence. Sanders crawled into the back of the van with the victim. Officers attempted to negotiate with Sanders for over 35 minutes as the victim screamed for help from inside the van. Sanders demanded that the officers on scene kill him. Fearing immediate danger to the victim, Brookside tactical officers made their way into the rear of the van and used a Taser stun gun on Sanders, while Jefferson County Sheriff’s Office deputies helped rescue the victim. Sanders was taken into custody while still inside the van.Sanders, from Los Angeles, has an extensive criminal history, according to the Brookside police. “He’s a homeless transient who has been living out of his van in Alabama for at least the last three months,” Jones told ABC News. Sanders is facing a host of felony and misdemeanor charges, including kidnapping and attempted murder, according to the Jefferson County Sheriff’s Office website. His bond is set at $191,000.