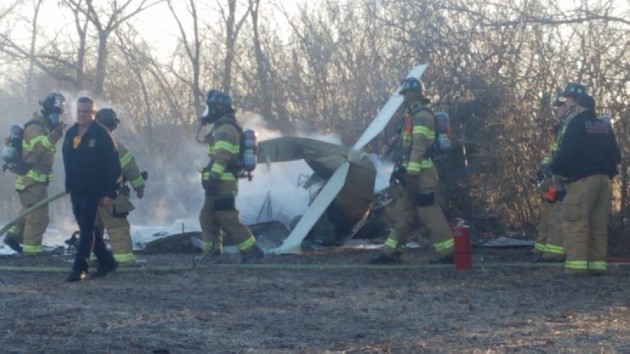 (OLATHE, Kan.) — A small plane crashed moments after takeoff from the Johnson County Executive Airport in Olathe, Kansas, killing two on New Year’s Eve. The single-engine Mooney M20S was engulfed by a post-crash fire, according to the Federal Aviation Administration. “You could see a black cauldron of smoke as you approached the airport,” Olathe Fire Capt. Mike Hall said at a press conference. “It’s a sad sight.”The aircraft had residual fuel leaking from one of the wings when first responders arrived, Hall explained, but firefighters extinguished the blaze in about 20 minutes using foam and dried chemical powders.Although flight data is not available, according to ATC audio, the pilot was cleared for departure “to the South, down towards Arkansas” at 4:03 p.m. CST.A spokesperson for the Johnson County Med-Act told ABC News three ambulances were dispatched to the crash scene only two minutes later.The airport is expected to be closed “for a day or two,” Deputy Director for the Johnson County Airport Commission Larry Pete estimated, as officials wait for National Transportation Safety Board and Federal Aviation Administration officials to arrive.