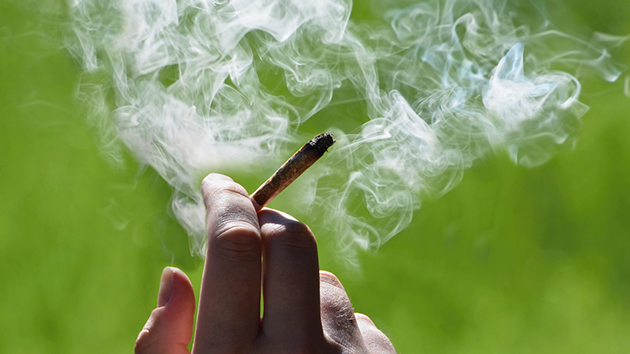 (CHICAGO) —  Dispensaries in Illinois were doing brisk business on New Year’s Day as recreational weed went on sale to adults a day after the governor pardoned more than 11,000 people convicted of low-level marijuana crimes.Six months after Gov. JB Pritzker signed into law legislation overwhelmingly passed by the state’s General Assembly to legalize cannabis, marijuana aficionados lined up to dole out their green for some green.”This is the beginning of a new age, the end of an antiquated viewpoint. It’s beautiful. I can’t wait to tell my grandkids about it,” 24-year-old Michael Lorimer told the Chicago Tribune, adding that he got in line outside the Midway Dispensary in Chicago at 4:30 a.m. — more than five hours before the shop opened.Illinois rang in the New Year by joining nine other states and Washington, D.C., in allowing the sale of recreational weed to persons at least 21 years old.The first day of sales, however, included some glitches that slowed business. Dispensaries reported problems entering sales into the state’s BioTrackTHC system, which keeps an inventory on how much weed is sold and the contents of THC, the active ingredient in marijuana that gets users high, in each product purchased.Under the law, Illinois residents can buy up to 30 grams of marijuana plant material, edibles with up to 500 milligrams of THC and 5 grams of cannabis concentrate items. Customers from outside the state can purchase half those amounts.”A small number of cannabis concentrates were miscoded in the State’s traceability system, resulting in single-gram concentrates being reported as concentrates that exceeded the concentrate maximum level of 5 total grams. The state’s traceability system vendor, BioTrack, has already resolved the issue,” a spokesperson for the Illinois Department of Financial and Professional Regulation said in a statement.Just hours before the prohibition on recreational cannabis was lifted, Pritzker announced he was granting pardons to 11,017 people convicted of low-level marijuana crimes involving fewer than 30 grams of weed.”Pay attention to the fact that we are beginning to accomplish four very important things: We are ending the 50-year-long war on cannabis. We are restoring rights to tens of thousands of Illinoisans. We are bringing regulation and safety to a previously unsafe and illegal market. And we are creating a new industry that puts equity at its very core,” Pritzker said during a New Year’s Eve address at a local church. Pritzker, who campaigned on a pledge to legalize cannabis and won election in November 2018, said the defining purpose of legalization “is to maximize equity for generations to come.””The Governor’s pardons of Illinoisans with convictions for marijuana possession makes the new year brighter for thousands. We applaud the Governor for acting to address the history of unnecessary and discriminatory enforcement of marijuana laws in Illinois,” the ACLU of Illinois said in a statement. “We know that Black Illinois residents are far more likely to be arrested and convicted for marijuana possession than whites. This is a good step forward as we begin the legal sales of recreational marijuana.”The American Civil Liberties Union of Illinois lauded the governor’s decision to grant pardons.Illinois is the first state where lawmakers passed legislation legalizing recreational cannabis. Voters in the other states and the District of Columbia passed ballot measures.Other states where cannabis can be legally purchased are Alaska, California, Colorado, Maine, Massachusetts, Michigan, Nevada, Oregon, Vermont and Washington.Copyright © 2020, ABC Audio. All rights reserved.