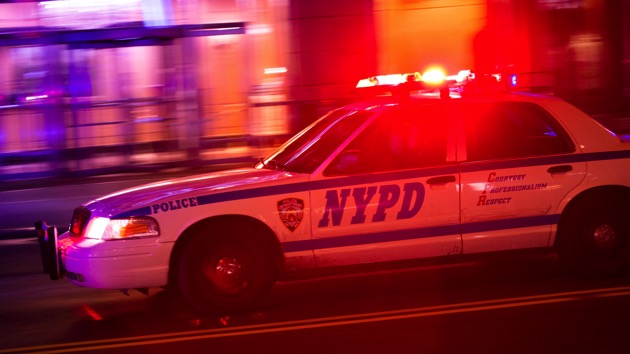 (NEW YORK) — Hanging out with friends turned into a dramatic rescue for one woman early Sunday morning in New York City.A 36-year-old woman told police she had been walking on a rooftop building with friends in downtown Manhattan, when a cover gave out, plunging her more than 10 feet downward, reported ABC News’ New York affiliate, WABC.Her friends believed she had left their gathering when the woman disappeared, but she had become wedged between two buildings after her fall. Neighbors in the area heard the trapped woman’s screams for help and according to the NYPD, two officers responded to a 911 call.

I want to shout out PO Barone and PO Manel—they responded to a 911 call for a person yelling for help. In their canvass and relentless follow up they discovered a person who fell 15 ft. between 2 buildings and remained trapped. 👏🏼👏🏼@NYPDSpecialops ESU then freed the person. 👏🏼👏🏼 pic.twitter.com/vHcLeLVeZm

On Dec. 29, at approximately 4:35 a.m.,”police responded to a 911 call for help at 308 Mott Street. Upon arrival the officers were informed that an individual heard a woman’s voice calling for help emanating from the rooftop of the location,” according to a statement from Detective Annette Shelton at the Office of the Deputy Commissioner, Public Information.”Members of the Emergency Service Unit responded and rescued aided by entering through a wall located on the third floor,” Shelton said.The woman had been trapped for “about two hours,” an NYPD spokesperson told ABC News.The woman was taken to Bellevue Hospital for evaluation.Copyright © 2019, ABC Audio. All rights reserved.