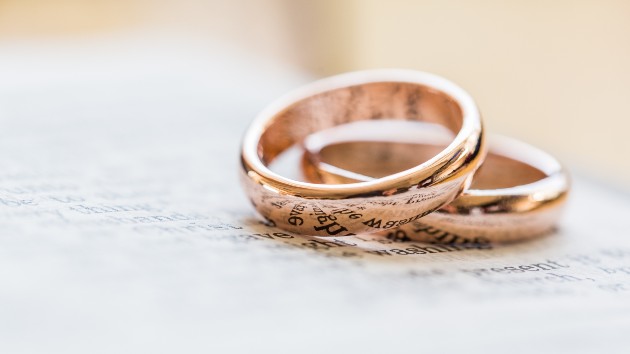 (NEW YORK) — Two of U.S. women’s soccer’s biggest stars are officially married. Ashlyn Harris, a goalkeeper for the U.S. Women’s National Team (USWNT), and Ali Krieger, a defender, tied the knot over the weekend in Miami in a glamorous wedding attended by their teammates, including Megan Rapinoe.The hashtag for Harris and Krieger’s wedding was #AliGotaKeeper, a reference to Harris’ position.Krieger, 35, wore a white wedding gown and Harris, 34, wore a tuxedo designed by Thom Browne.The newlyweds, who both also play for the Orlando Pride, were joined Saturday by many of their past and present World Cup teammates, including Abby Wambach and co-captains of the 2019 World Cup-winning team Rapinoe and Alex Morgan.The couple chose a rainbow-colored wedding cake to celebrate their union.They also celebrated the fact that they could actually get married, choosing as a reading at their ceremony the 2015 Supreme Court opinion written by now-retired Justice Anthony Kennedy that made same-sex marriage legal, according to Wambach’s wife Glennon Doyle, who shared details of the moment on Instagram.”Thank you, thank you for last night, @ashlynharris24 and @alikrieger. Your love makes everyone who knows you braver and softer and truer. You are loved,” Doyle wrote. Copyright © 2019, ABC Audio. All rights reserved.

As Big Ten decides to return, 42 Wisconsin players and staff have tested positive for COVID, officials say
‘Cheer’ star Jerry Harris arrested, charged with production of child pornography
New charges for ex-Giuliani associates Parnas and Fruman
Feds unveil plan to ‘reduce suffering’ for nursing home residents and staff amid COVID-19 pandemic
Mask confrontation gets mom and 2-year-old kicked off flight
How did coronavirus get transferred to humans? Scientists may have an answer