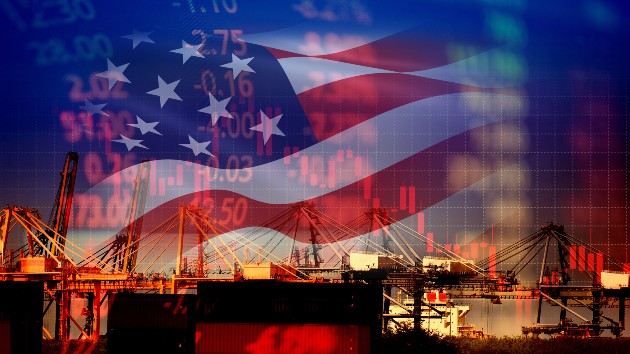 (WEST PALM BEACH, Fla.) — President Donald Trump’s tariffs and the retaliation by countries he has targeted have resulted in job losses and higher costs for U.S. manufacturers, negatively affecting them overall, a federal study recently found. Trump has made tariffs a central element of his trade policy — placing levies on hundreds of billions of dollars of goods from Asia, Europe and Latin America — and launched a trade war with China that prompted it to respond in kind with tariffs targeting U.S. manufacturers and consumers. Those retaliatory tariffs, coupled with the higher costs, have had a larger detrimental effect than any positive benefits the president’s tariffs have created, according to a Federal Reserve study released last week.“[O]ur results suggest that the tariffs have not boosted manufacturing employment or output, even as they increased producer prices,” the study’s authors wrote in the study published Dec. 23. “While the longer-term effects of the tariffs may differ from those that we estimate here, the results indicate that the tariffs, thus far, have not led to increased activity in the U.S. manufacturing sector.”The study looked at a mix of tariffs imposed in 2018 on China, Canada, Mexico, South Korea and the European Union, as well as retaliatory tariffs.Since 2018, the Trump administration has slapped tariffs on hundreds of billions of Chinese goods, prompting China to respond in turn even as the two countries engaged in negotiations on a potential trade deal.Earlier this month, Trump and China said they had agreed on “phase one” of a trade deal — they made a similar announcement two months before that never came to fruition — and the White House has said it would be signed in the coming weeks. The president announced that, as a result, he would hold off enacting sanctions previously announced to go into effect this month.Copyright © 2019, ABC Audio. All rights reserved.