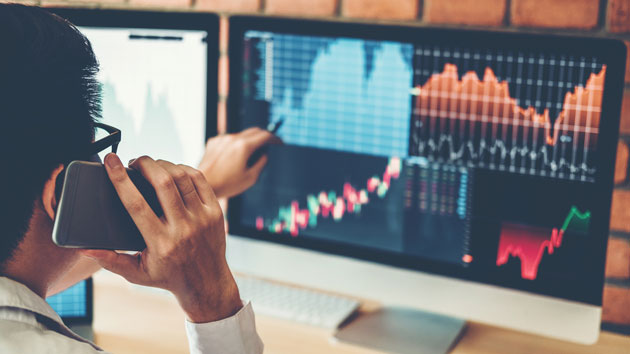 (NEW YORK) — The three major U.S. stock market indexes in 2019 saw some of their strongest annual gains of the decade, closing out a roller coaster ride that drove equities to record highs and lows during the year.The tech-heavy Nasdaq and the benchmark S&P 500 rose 35.2% and 28.9%, respectively, for the year, marking their biggest annual gains since 2013. The Dow climbed 22.3%, its best year since 2017.Shares of Apple and Microsoft were among those that pushed the Dow higher, gaining 86% and 55%, respectively. The outperforming stocks also accounted for nearly 15% of the S&P 500’s annual climb, according to S&P Dow Jones Indices.The indexes spent most of the last trading session of the year wavering between gains and losses but ended in positive territory. The Dow closed at 28,538.44, up 0.27% on the day, while the S&P closed at 3,230.78, up 0.29%. The Nasdaq rose 0.3% to close at 8,972.60.The gains were modest, but it was a stark difference from last year when a government shutdown and trade war tensions roiled markets into the new year.The S&P 500, which includes many of the biggest American companies, has had a total return of about 257%, or about 13.6% annually, since the beginning of the decade, Howard Silverblatt, a senior index analyst at the S&P Dow Jones Indices, wrote on Twitter. That’s higher than the average annual total return, including dividends, of about 10.3% since the 1920s, he said.Those calculations did not include figures at Tuesday’s close. Copyright © 2019, ABC Audio. All rights reserved.