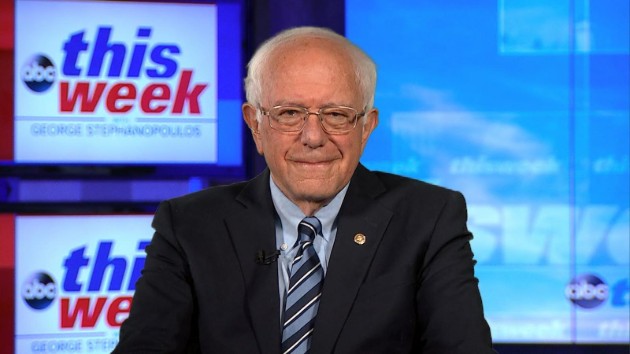 (WASHINGTON) — According to letters written by three doctors and released by his campaign on Monday, Sen. Bernie Sanders is currently in “good health” nearly three months after he suffered a heart attack that took him off the campaign trail for several weeks. “Mr. Sanders is more than fit enough to pursue vigorous activities and an occupation that requires stamina and an ability handle a great deal of stress,” Dr. Philip A. Ades, director of cardiac rehabilitation, and Patrick D. Savage, senior clinic exercise physiologist at the University of Vermont Medical Center, wrote in the letter.The 78-year-old senator from Vermont was hospitalized following the health scare in October.Since then, Sanders’ “heart muscle strength has improved” and he is no longer taking the medication that was initially prescribed to him after the heart attack, according to Dr. Brian Monahan, the attending physician at the U.S. Capitol. “You have never had symptoms of congestive heart failure. The heart chamber sizes, wall thickness, estimated pressures, and heart valves are normal. Several 24-hour recordings of your heart electrical activity indicated no significant heat rhythm abnormality,” added Monahan. In December, Sanders also underwent a treadmill stress test with continuous electrocardiogram, or EKG, monitoring, which demonstrated heart function, muscular exertion and oxygen consumption. Sanders tested at a 92% level of maximum exertion of his predicted heart rate, with no evidence of reduced blood flow to his heart, according to a campaign news release. “Mr. Sanders was able to exercise to a level that is approximately 50% higher than other men his age with a similar diagnosis,” wrote Ades. According to Monahan, Sanders had a normal blood pressure level, and was “6 feet 0 inches tall, and weighed “174 pounds.”Sanders has also been treated for several other medical conditions, including gout, high cholesterol, diverticulitis, an inflation of the intestines, hypothyroidism, an under active thyroid gland, laryngitis, lumbar strain and complete removal of superficial skin lesions. “At this point, I see no reason he cannot continue campaigning without limitation and, should he be elected, I am confident he has the mental and physical stamina to fully undertake the rigors of the Presidency,” Dr. Martin M. LeWinter, Sanders’ personal cardiologist and the attending cardiologist at UVM, wrote in a separate letter.Although Sanders — the oldest candidate in the 2020 race — has pledged to release his medical records ahead of the Iowa caucuses, he has yet to release the full reports. Earlier this month, Massachusetts Sen. Elizabeth Warren released her medical records, which revealed she was in “excellent health,” according to her primary care physician.Former Vice President Joe Biden has also pledged to release his medical records before the Iowa caucuses.Copyright © 2019, ABC Audio. All rights reserved.