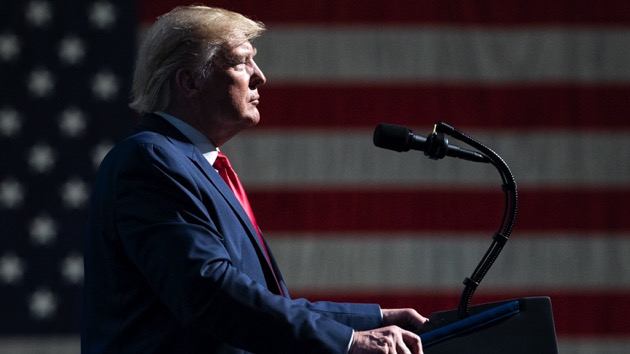 (NEW YORK) — Former Trump 2016 campaign manager Corey Lewandowski announced on Twitter on Tuesday that he will not run for Senate in New Hampshire after all, saying he would put his efforts into reelecting President Trump in 2020.”After much consideration I have decided to forgo a campaign for the US Senate. While taking on a career politician from the Washington swamp is a tall order, I am certain I would have won. My priorities remain my family and ensuring that @realDonaldTrump is re-elected POTUS,” he said on Twitter.”NH needs a US Senator who will put our citizens first and not illegal aliens; one who will support pro-growth policies to keep the Trump economy strong,” he continued.Lewandowski had been toying with a run, launching a campaign page in the middle of his testimony in front of the Senate in September.He said in early August that he was “seriously considering” running for the U.S. Senate in 2020, with the hopes of unseating incumbent Democratic Sen. Jeanne Shaheen.The New Hampshire Democratic Party propped up Shaheen in a statement released Tuesday morning in the wake of Lewandowski’s Twitter messages.”Every Republican running for Senate in New Hampshire has stood proudly with Corey Lewandowski and Donald Trump in their efforts to take away health care from tens of thousands of Granite Staters and reverse Roe vs. Wade. While Messner, Bolduc, and O’Brien tear each other down in the contentious primary Lewandowski has left behind, Senator Shaheen will continue working across the aisle for New Hampshire, leading efforts to lower prescription drug costs and making sure veterans and their families get the benefits they deserve,” the party said.Lewandowski briefly worked for the Republican National Committee, and most notably, spent almost seven years at the Koch brothers-backed Americans for Prosperity. He was also the executive director of the New England Seafood Producers Association and the director of public affairs at a PR firm. Lewandowski is a New Hampshire Police Academy graduate, guest lecturer, licensed real estate agent and notary.

Trump’s 2020 campaign manager Brad Parscale tweeted a message supporting Lewandowski after the announcement.”Corey is a great American and would no doubt have become a great Senator from New Hampshire. We thank him for all his work in helping @realDonaldTrump get elected in 2016 & look forward to his continued support as we re-elect the President in 2020,” Parscale said.

Lewandowski’s decision to sit the race out leaves a number of statewide Republican with better chances: retired Army Gen. Donald Bolduc, attorney Bryant Messner and former state House Speaker Bill O’Brien. Lewandowski said he would announce an endorsement in the near future.