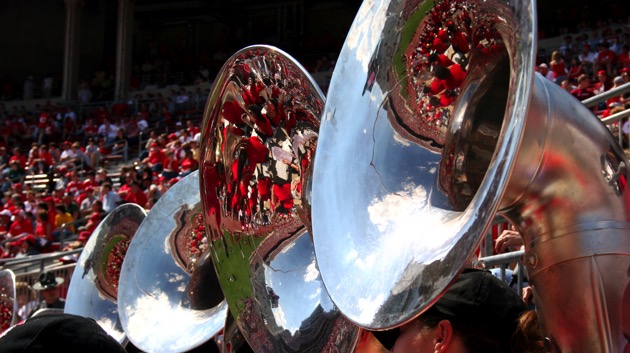 (TAMPA, Fla.) — The only blind marching band in the world will be the lead band at the Outback Bowl New Year’s Eve parade and perform at halftime on New Year’s Day.On Tuesday night, the Ohio State School for the Blind (OSB) band, made up of students in grades 7-12, will take the field guided by community volunteers at Raymond James Stadium in Tampa, Fla., according to a press release.With talent from all across the state, the band, started in 2005, has been nationally recognized for its ability to entertain and inspire.“We are excited to host this group of talented young people as part of our halftime show and New Year’s Eve Parade,” Outback Bowl President and CEO Jim McVay said in a statement. “It is a great opportunity to showcase their abilities on a big stage.”

Join us for #FootballInParadise at the 2020 Outback Bowl! Going to be a great game as the #9 Auburn Tigers face off against the #16 Minnesota Golden Gophers on New Year’s Day at Raymond James Stadium. Get your tickets today! ☀️🏈🌴https://t.co/J1aOrCoeSw pic.twitter.com/xXjsjTAzXB

The former band director Carol Agler added the marching band to support the Ohio School for the Deaf Football program 14 years ago.OSSBMB performs half-time drills at area high schools, in band festivals and regularly march as the lead band in the Millersport Sweet Corn Festival Parade and the Circleville Pumpkin Show.The Auburn University Tigers will take on the University of Minnesota Golden Gophers for the New Year’s Day bowl game, which starts at 1 p.m. ET and airs on ESPN.Copyright © 2019, ABC Audio. All rights reserved.

Childcare crisis during pandemic will set women back in the workplace, experts say
‘Young Rock’: Dwayne Johnson announces cast members for NBC show
Pelosi, Mnuchin fail to strike coronavirus stimulus deal but talks will continue
Jennifer Aniston almost gave up on acting before being cast on ‘The Morning Show’
Ilyasah Shabazz says ‘The Godfather of Harlem’ is “great,” but didn’t show the “depth” of her father Malcolm X
Windy, dry and hot weather will continue for parts of California