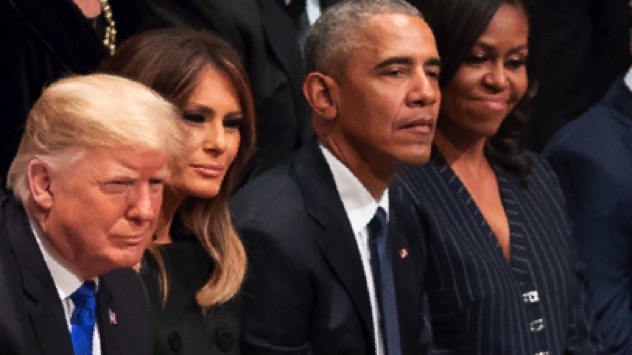 (PRINCETON, N.J.) — President Donald Trump and former President Barack Obama tied for the top spot as America’s most admired man in 2019, according to Gallup’s annual poll, marking the first time for Trump has earned the distinction, and the 12th time for Obama.Both Trump and Obama each earned 18 percent support among Americans as the man “living today in any part of the world” they admired most, according to the survey.But in a polarized electorate, the results of the poll break strongly along partisan lines, with 41 percent of Democrats, 12 percent of Independents, and only 3 percent of Republicans choosing Obama, and 45 peace nt of Republicans, 10 percent of Independents, and 2 percent of Democrats opting for Trump.Aside from the two presidents, no other man earned support from more than 2 percent of Americans, but finishing out in the top 10 are former President Jimmy Carter, businessman Elon Musk, Microsoft founder and philanthropist Bill Gates, Pope Francis, Sen. Bernie Sanders, I-Vt., California Rep. Adam Schiff, D-Calif., the Dalai Lama, and investor Warren Buffett.Since 1948, Gallup has asked U.S. adults to identify which man and woman living anywhere in the world they admire most in an open-ended poll. Throughout the years, Americans often choose the incumbent president as the most admired man, with the Oval Office holder clinching the honor in 58 of 72 prior Gallup polls. The 2019 poll was conducted from Dec. 2-15, 2019.In 2018, facing a lower approval rating, only 13 percent of Americans picked Trump as the most admired man, up one percentage point from 2017, the first year of his administration. He landed in second to Obama’s 19 percent in 2018 and 17 percent in 2017.Among the most admired women, former first lady Michelle Obama leads in the top spot by double digits.Ten percent of Americans picked Obama as the most admired woman of 2019, according to the poll, with current First Lady Melania Trump finishing in second at 5 percent.Last year, 10 percent of Americans named Obama as the most admired woman of the year, which Gallup notes came on the heels of the release of her bestselling autobiography, Becoming.Among the top 10 most admired women are Oprah Winfrey, former Secretary of State Hillary Clinton, teen climate activist Greta Thunberg, England’s Queen Elizabeth II, House Speaker Nancy Pelosi, Supreme Court Justice Ruth Bader Ginsburg, Massachusetts Sen. Elizabeth Warren, German Chancellor Angela Merkel and former U.S. Ambassador to the United Nations Nikki Haley. Copyright © 2019, ABC Audio. All rights reserved.